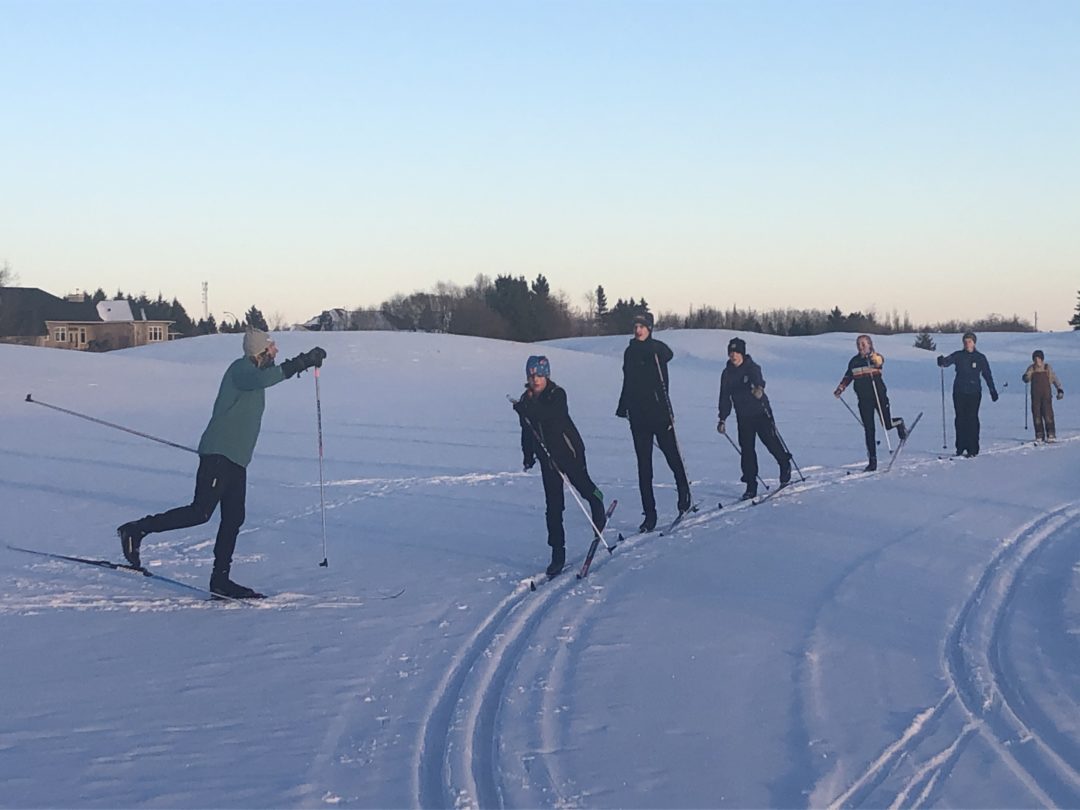 AltaGas Grants: A Lifeline to Clubs Grabbing Hold of the Undecided and Converting them to Cross-Country Skiing

Nearing a year and a half ago, on the outskirts of Bonnyville (pop. 6,000), nestled in the Lakeland District of northern Alberta between Cold Lake and St. Paul, Les Parsons married a local lass, thereby making her home his. 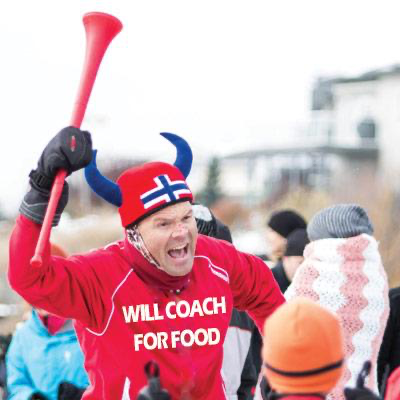 The couple tied the knot on Friday, June 21st, the summer solstice, outside, in the glories of nature, at Lookout Point. The ceremony was held on a cross-country ski trail.

Not with Les Parsons being a familiar face on the national and international skinny-ski circuit, having coached Olympic gold medallist Beckie Scott and two-time World Champion Alex Harvey.

Naturally, bride Sarah Parsons is every bit as avid a cross-country skier and outdoors enthusiast as her husband.

“We thought: ‘Wow!’,’’ says Les. “We’ve got this incredible region of lakes and forests and hills and creeks to work with and enjoy. What a great place to run a cross-country ski program.’’

And so they decided to do precisely that, establishing the Bonnyville Cross Country Ski Club this winter, made up of the old and the young from a cluster of nearby towns.

“People skied here, but we wanted to formalize it,’’ explains Les Parsons. “And it has exploded. We have a hundred members already. All volunteer  leaders from regional clubs. No professionals. Totally grassroots driven.”

Which is where a helping hand from long-standing cross-country ski sponsor AltaGas enters the main frame.

The start-up club in Bonnyville received a $6,000 equipment grant through a new AltaGas grant program designed to support clubs. 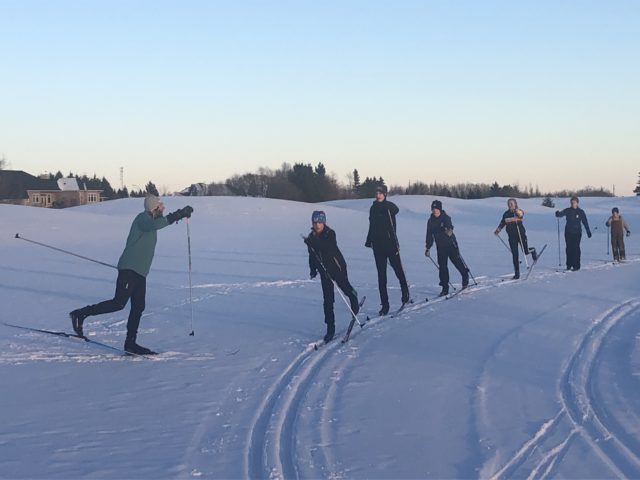 “We couldn’t do all of this without the AltaGas support,’’ says Parsons. “If we had to collect a bunch of wooden skis from bamboo poles and three-pin bindings, old fibreglass skis … well, that wouldn’t exactly excite people.

“Putting good equipment into the hands of young people, then providing qualified, certified coaches is the base foundation.

“We’ve got the club. We’ve got the volunteers who are willing to do the administration. It’s just the ski part now.

“This is a lifeline. We just started the club and then we heard about the grants. Some people would think: ‘Oh, there’s a grant. Let’s start a club and go get it.’ “Well, we already had everything in place – and then: ‘Hey, look!’ We had 20 people show up from our region to take this Introduction to Community Coaching course.

“So, people are thirsty to jump in and help the sport grow.

“I’ve been coaching for 35 years and this is a dream to have this kind of a grant from AltaGas, a real kick-start. What a great way to get us going.”

In total through this program, AltaGas supplied financial support to 14 clubs, stretching from Halifax, N.S. to Quesnel, B.C. Through a companion initiative, S 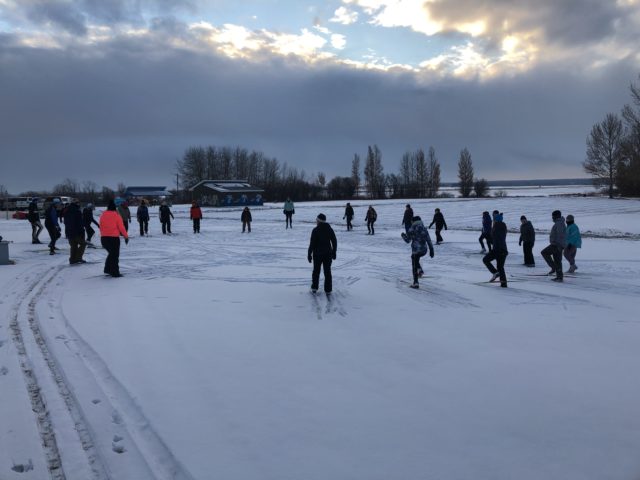 The COVID-19 pandemic has only whet the appetite of people suddenly restricted in their fitness endeavours; in search of a fresh outlet to stay in shape while having fun in an age of at-least-six-feet-apart.

“Our sport is quite ideal when you have to practice social distancing, which is why we’ve seen a big increase in membership,’’ notes Nordiq Canada CEO Stéphane Barrette. “So, we’ve tried to combine these different opportunities and say: ‘OK, how can we adapt our program and our support to take advantage of the surge in membership at the community and recreational level?’ That’s how we re-oriented part of our AltaGas-related funding, more than ever for community-support initiatives in different forms.”

Barrette estimates membership has risen a whopping 40 per cent over the close of last ski season.

“In a normal year,’’ he acknowledges, “our membership number barely budges. Every year it seems we lose some clubs, gain some new clubs but the (membership) total doesn’t move much from about 55,000-56,000.

“If this (current) trend is sustained through until the end of the winter, we’re going to hit 80,000 members. That is a historical jump.”

What’s imperative not to lose sight of, however, is that these are, indeed, strange times.

“The main reason we’re coming up with new programs is because we want new members, people joining our sport, to have a really good experience,’’ says Barrette.

“So, while we’re extremely pleased to see the increase, we’re not naive, either. We’re not taking it for granted that these members will stick with our clubs and with us going forward unless we come up with initiatives that helps retain those people.

“We realize that up until now they were doing other things in the wintertime – maybe alpine skiing or taking vacations down south, so they didn’t think it was worth it joining a club.

“We need to ensure they’re going to have a good enough experience, this winter so that they’ll be prepared to change their habits going forward, when we’re somewhat back to normal. That’s the challenge at hand.”

The grants by AltaGas are designed to help elevate those experiences. 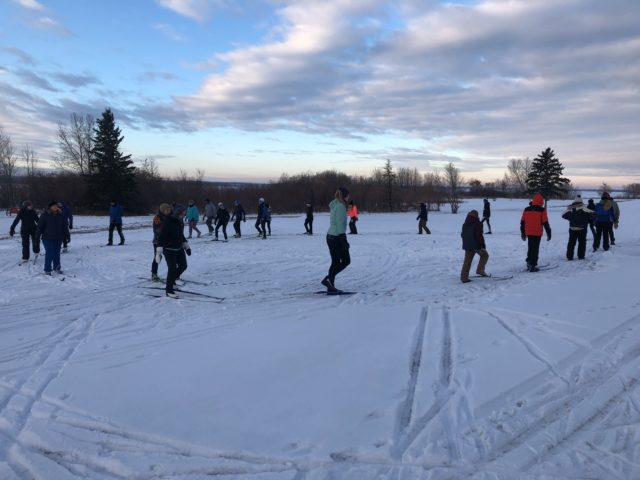 Another of the clubs receiving a grant ($6,000, for infrastructure investment) is Club de ski Amos, located in Amos, Quebec.

The club, which provides free membership for those 18 and younger, numbers over 700 participants, 25 of those having reached the competition level.

“This year, at the high school, one period each day is used for sports,’’ explains Jean-Francois Gelinas of the Amos club’s intent when applying for the AltaGas grant.

“We are with cycling in the summer and skiing in the winter. There were trails behind the school, but we wanted to make sure we had what was needed to make the trails better for skiing. We were borrowing the machine to do the trails. Someone decided to buy a machine but there was not classic hydraulic (snow-grooming) equipment.

“We want perfect trails behind the high school. Three elementary schools are close by. So, we wanted to share with all the young people in the nearby schools, so they can come and ski our trails.”

“We now have around 400 students in high-school and elementary school who will ski here this winter. We’re hoping they will like the sport, and then join our club with their parents.”

In an effort to keep abreast of the changing interests of young people, Gelinas says the Club de ski Amos is hoping to introduce a derby circuit next ski season “with hills and drops and jumps.”

As someone who’s coached skinny-ski athletes on the world’s grandest sporting stage, Les Parsons understands the need to grab hold of the undecided and transform them into converts.

“Everyone can have their own Olympics,’’ he emphasizes. “For some kids, it’s the Alberta Winter Games. For others, the Alberta Youth Championships in Bragg Creek, Alberta. Or a local loppet. For an 80-90-year-old person, their Olympics could be skiing three kilometres or five kilometres a day. 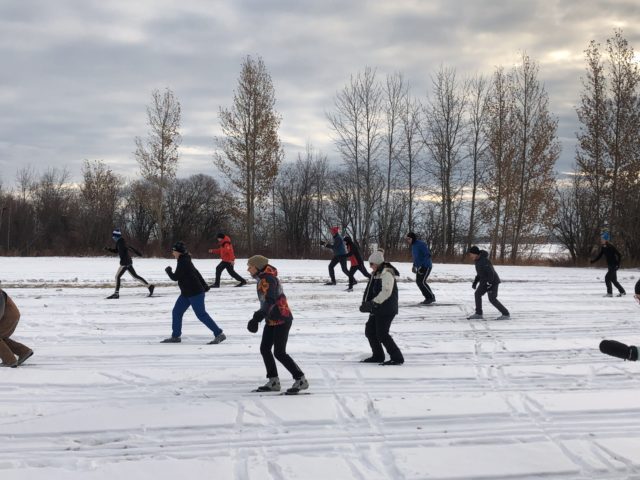 “That’s the key: Finding what your Olympics are. Define that and let’s go get it. Let’s make it happen.”

“We’re just trying to get people out and rediscover nature. Basically, it’s screen time vs. ski time. And we’re getting our butts kicked by screens. Maybe we can’t compete with Minecraft or Fortnite. But we’re still going to take ‘em on, one kid at a time.”