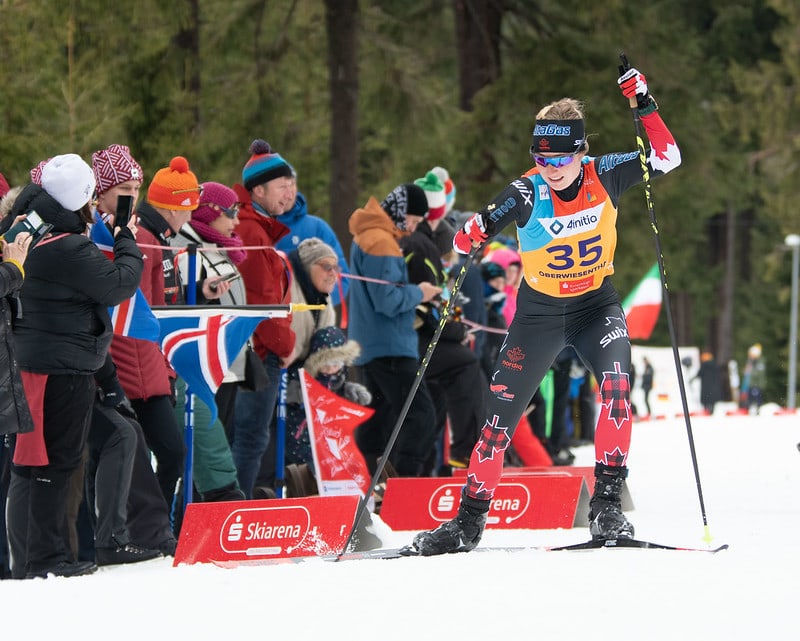 OBERWIESENTHAL, Ger.—Laura Leclair posted the top Canadian result on the opening weekend of the Nordic World Ski Championships after finishing 20th in the women’s Under-23 cross-country skate-ski race on Sunday.

One of eight Canucks to suit up for the sprint event at the Sparkassen Skiarena, the Under-23 squad matched their junior comrades by qualifying three athletes for the head-to-head heats. While Leclair was the lone Canadian woman to scrap it out with the world’s best in the heats, Graham Ritchie (Parry Sound, Ont.) and Antoine Cyr (Gatineau, Que.) also earned a spot in the knockout rounds.

Ritchie had a bittersweet day while matching his 26th place finish from last year’s sprint race. Cyr was 28th. Both athletes were racing in second spot before crashing in their quarter-final rounds.

Leclair squeaked into the heats with the top-30 women’s athletes after posting the 27th best qualifying time on the fast 1.2-kilometre track that threw a variety of conditions at the next generation of elite cross-country skiers.

Skiing strong and steady throughout the day, the 22-year-old from Chelsea, Que.’s day came to an end after crossing the line in fourth place in the round of 30.

“My heat went well, and I was happy with the way I skied. I was able to kick in an extra gear on the final climb,” said Leclair, who added she was happy to ski clean on a tricky course that saw many top skiers fall or break poles.

Only the top-two athletes in each heat, along with the next two fastest times overall move to the next round.

“I am happy with the end result. I was looking for a top-20 which I was able to do, however, I would have for sure loved to move up into the semi-finals. The team did an amazing job with the skis. They were wicked fast today,” she said.

Sweden’s Emma Ribom won the women’s Under 23 sprint crown. Her teammate, Johanna Hagstroem celebrated the silver medal, while Julia Kern, of the United States, battled to the bronze.

Canada’s Graham Ritchie grabbed the nation’s attention early on Sunday after chalking up the sixth-fastest qualifying time on the men’s 1.3-kilometre track, which saw all four Canucks experience crashes.

Fit and fast, the 21-year-old Ritchie was on pace to move onto the next round before running into a wall of bad luck in his quarter-final heat.

“I was in strong position heading into the final climb, but unfortunately got tangled up and broke a pole. That pretty much shut me out of any chances of moving on,” said Ritchie following his 26th place result. “I’m pretty bummed after the heats, but happy with my qualifier. To place sixth shows the potential is there and that I really have it in me moving on to the next World Cup sprints.”

Ritchie has been splitting time racing on the World Cup and domestically in Canada on the Haywood NorAm circuit this year.

“That qualifier definitely helps with my confidence,” added Ritchie. “That result will be the positives I take away from today. I know that if I can continue to race like that, I will be really happy, and the results will follow.”

Canada’s Antoine Cyr, who is making his third trip to the Under-23 World Championships, also had a strong outing. Qualifying in 18th, the 21-year-old was racing in second spot in his opening heat before his day came to an end after crashing to the hard-packed snow. Cyr was forced to settle for 28th.

Norway’s Vebjoern Hegdal won the men’s Under-23 sprints. Italy’s Mattia Armellini was second, while Harald Oestberg Amundsen, also of Norway, skied onto the bronze-medal step of the podium.

Ottawa’s Pierre Grall-Johnson and Philippe Boucher, of Levis, Que., both crashed in the qualifying round, finishing 63rd and 70th respectively.

The FIS Nordic Junior and Under 23 World Ski Championships continue on Monday with the junior 5- and 10-kilometre classic-ski races.