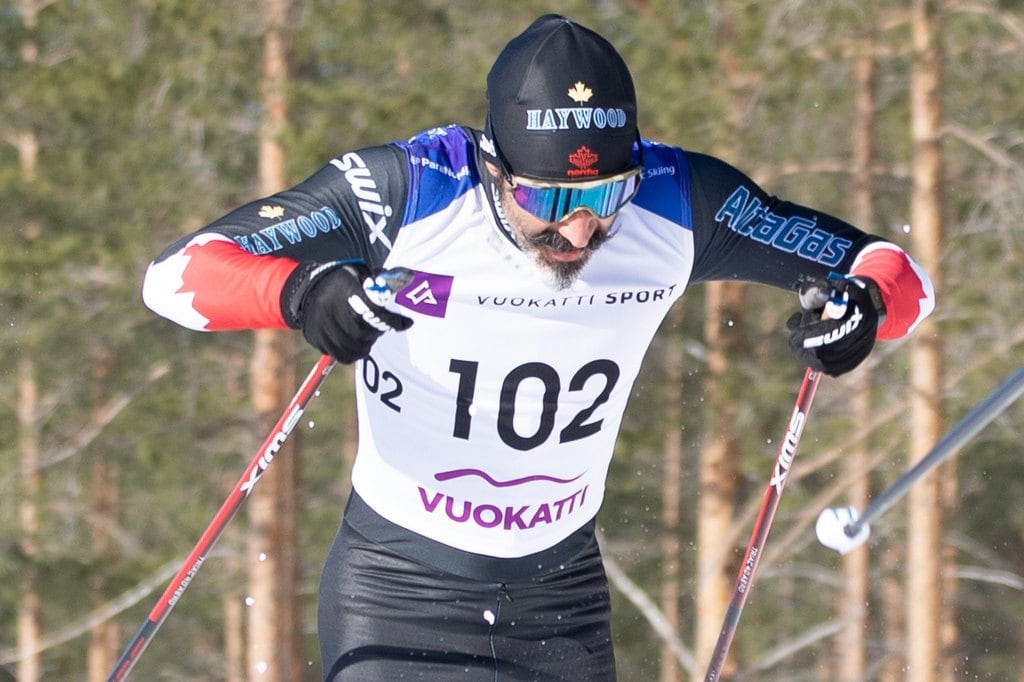 VUOKATTI, Fin.–Canada’s Para-Nordic squad made a double-medal statement on Friday in their first World Cup start in more than a year.

Brian McKeever and his guide Russell Kennedy (both of Canmore, Alta.) teamed up to win the gold medal, while Brittany Hudak (Prince Albert, Sask.) had one of the best races of her life to claim the bronze in the middle-distance classic cross-country ski races in Vuokatti, Finland.

The 41-year-old McKeever, a winner of 17 Paralympic medals throughout his illustrious career put the hammer down while testing his shape for the first time this year in the men’s 12.5 kilometre visually impaired race. With Russell Kennedy – who competed at the 2018 Olympics before guiding McKeever at the Paralympics – leading the way, the Canadian duo clocked a golden time of 30:51.0.

“That was hard on an old man, especially when the guy in front of me is coming off a top-30 at the World Championships,” laughed McKeever. “It was a good start today. The course is pretty flat and does not have a whole lot of recovery on it, so we were working the whole way and I’m quite tired but it was a really good effort today.”

Fresh off a breakthrough season competing on the able-bodied World Cup circuit and at the recent World Championships, the 30-year-old Kennedy set a blistering pace for McKeever who was recently named in Sportspedia’s top-100 sports people for 2020.

“It was really cool to see Russ’ shape. He did amazingly well today looking over his shoulder, being super attentive that he was not getting too far ahead of me, and talking through the race,” added McKeever, who has spent the last month in Europe helping test skis for Kennedy and Canada’s Olympic pathway athletes at the recent World Junior/U23 Championships and senior World Championships with the Para-Nordic season on hiatus until this month due to COVID-19.

“It was really good for me to be at World Juniors and World Champs just to be around racing. It was quite chill until the day before the race and then everything changed for the staff, athletes and everyone on the team. You know when it is go time. Everything jumps to a new level so that was good for me to experience and go through it today.

“Doing time trials is one thing but it is not the same as when you put on a bib. It definitely puts you in a different head space when you are here with everyone and really measuring where you are at. That is so important.”

Judging by first impressions, McKeever is tracking nicely on the trail to his sixth Paralympic Games in 2022.

He left his top rivals, Zebastian Modin and Stanislav Chokhlaev, deadlocked in second on Friday. Sweden’s Modin, who has knocked McKeever off the top of the podium a handful of times over the last quadrennial, finished tied for second at 30:56.8 with Russia’s Chokhlaev.

The trail to the Para-Nordic World Cup podium continued for the Canucks in the women’s standing race. Brittany Hudak battled to her first career podium since the middle-distance races were changed to 10 kilometres for the women.

The 27-year-old Hudak, who won a biathlon bronze at the 2018 Paralympic Games, proved she is a medal contender on the trail to Beijing 2022 after posting a third-place time of 29:59.4.

“With this being my first international race of the season, I was beyond excited and grateful to get to put a race bib on again. Going a full year without international races really solidified how much I love racing and travelling with the team,” said Hudak, who has also put her degree in social work into play this past year while working at a group home for teens with Enviros Wilderness School Association while training and staying ready for the restart of international racing.

It was the first Para-Nordic World Cup podium in cross-country skiing for the biathlon specialist in five years, and her fourth ever middle-distance podium. The other three, including a third-place finish at the 2015 Para-Nordic World Cup at the same venue in Vuokatti, came in the 7.5-kilometre distance.

“I’m super happy to be starting off the World Cup with a podium finish. I’ve felt satisfied with a good year of training, so I was eager to see where my fitness was at amongst my competitors,” added Hudak, who fed off the energy of the moment on the flowing Finnish trails while pulling away from the field in her final lap.

“I had great energy throughout the race and wanted to sustain my pace. Every time I got splits on how close I was to a podium, I just felt more energized. The tracks weren’t super-fast, but the techs did a great job on the skis.”

Norway’s Vilde Nilsen won the women’s standing race with a time of 28:51.5. Hudak finished just two seconds behind Ekaterina Rumyantseva for second place in the fight for the medals. The Russian held on for the silver medal with a time of 29:48.7.

Other Canadian results included Derek Zaplotinsky, of Smokey Lake, Alta., finishing 10th with a time of 33:47.0 in the men’s 10-kilometre sit-ski race.  Two development athletes also suited up in the women’s 7.5-kilometre sit-ski discipline. Christina Picton, of Fonthill, Ont., was sixth at 30:56.0. Lyne-Marie Bilodeau, of Sherbrooke, Que., placed ninth at 35:04.0.

“It was a good day for the whole team and really good for Brittany. I’m so pumped that Derek, Brittany and the development girls came over,” added Brian McKeever. “We need to see where we are at and where others are at. You can expect the top nations to be strong but when you line up against them you really see the work that needs to be done for the next year and that is really important for your mind to know.”

The Canucks will head back into battle on Saturday when the Para-Nordic World Cup continues in Vuokatti with the sprint races.