It is no mere coincidence that Dave Wood came along just as Canada’s insurgence into the cross-country skiing elite began.

“He worked hard to create a culture of unity and support within the ranks,” Beckie Scott pointed out, “which was ultimately a determining factor in how successful we became.”

“He was,” pitched in Sara Renner, “the ground-breaker in the Canadian coaching system in the sport of cross-country skiing.” 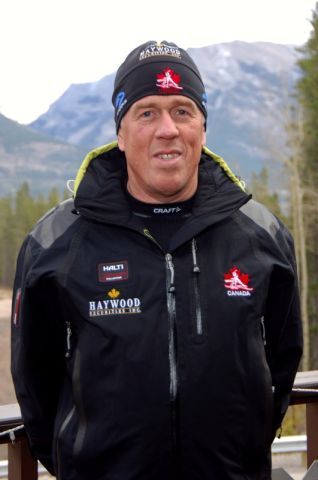 After a coaching career spanning nearly four decades, including stints with the Canadian junior and senior national teams, the 65-year-old Wood is retiring. He does so leaving behind a legacy of excellence that his former charges will readily attest to.

“Dave made an enormous contribution to cross-country skiing in Canada through his many years of dedicated coaching and service to the sport,” said Scott, who under Wood’s tutelage won a gold medal in the pursuit race at the 2002 Winter Games at Salt Lake City – the first North American woman to win an Olympic medal in the sport. 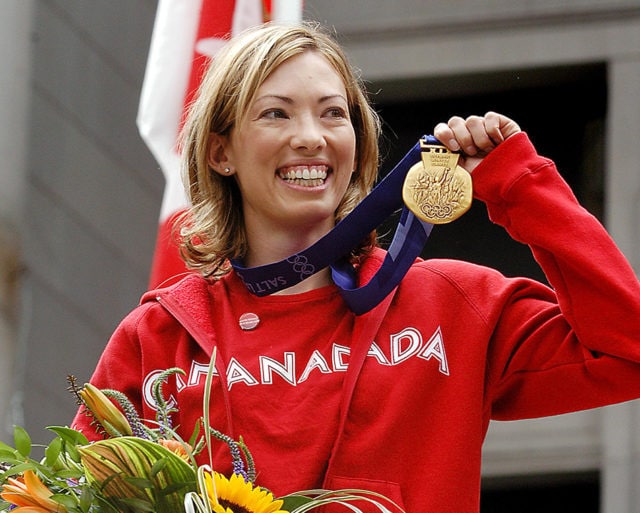 “I think I would describe it as a really special time in history because it was a perfect combination of athletes, leadership and support staff that were really motivated and really inspired to move forward and progress up the international ranks. Dave was obviously leading that charge. We had a really strong and cohesive team who had a really good time together, and Dave was a big part of that.”

Those Games in 2002 obviously remain one of Wood’s most cherished memories.

“One of the things when we look at the Salt Lake City Olympics where Beckie won her medal – that was done 100 per cent with Canadians, and led by people who came up through the Canadian system,” he explained. “A lot of former athletes like Yves (Bilodeau) and Alain Masson were helping us. So, it was all Canadians from the Canadian program that put those results up and I think that said a lot about what we were able to accomplish as a country.”

Wood began his coaching career in B.C. in 1986 and shortly thereafter joined the National Team as head wax technician. In 1995, he headed up the junior squad as part of the development program in Canmore and three years later he replaced Steinar Mundal as National Team head coach. He held that post for 12 years, a most successful stint.

“He definitely set the bar high for high-performance sport and really worked hard to seek out expertise and knowledge from various places and people in terms of what could be beneficial to us as athletes performance-wise.”

Renner had the first-ever podium finish by a Canadian at a FIS World Championship in 2005 under Wood’s guidance. One year later at the Turin Olympic Games, she and Scott won a silver medal in the team sprint – just days before Olympic rookie, Chandra Crawford, won gold in the women’s sprint race. 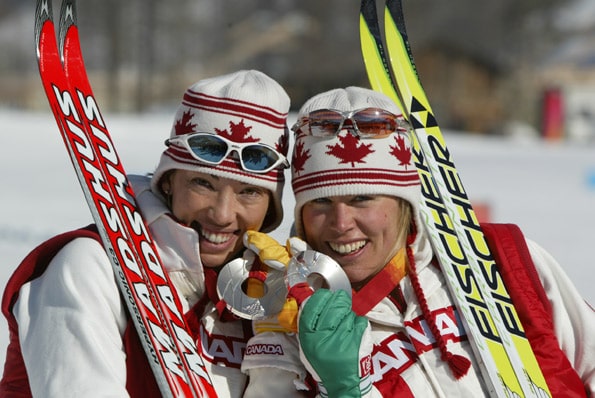 “I think Dave believed in our capabilities when there was no reason to believe that the National Women’s Team could be champions,” opined Renner. “I would say there was definitely a hunger to be excellent. Not only was he raising Olympic medallists and World Championship medallists, he also had a group of women and had the emotional challenges that went along with that. That was one of the strengths of Dave – he was able to mould a cohesive group into this common path of being excellent.

“For me, Dave was this person who believed,” Renner continued. “He was a student of the sport and was always willing to learn. For me, he was able to find a training program that could make me the very best that I could be. I think if I didn’t have Dave in my life, I wouldn’t have reached that potential.”

These female athletes stood out in terms of international success, but weren’t the only ones who benefited from Wood’s coaching prowess. Men from across Canada quickly began to follow the path to the podium in both the Olympic and Paralympic pathways.

“To me, he was always leading by example,” noted Brian McKeever, Canada’s most decorated Winter Paralympian with 17 podium finishes, 13 of them gold. “I think he had a real knowledge of high-level coaching. He wasn’t in it for himself.

“Dave and I were often on the same page, but not always. And when we weren’t, he was willing to sit down and talk about ideas and we’d compromise. Now, when you watch him at a club level, he does so much for his athletes at races. He really tries to support them and that level of support is palpable to other athletes who are observing from outside. He’s a good man. He cares. He’s an honest man and that’s the reason he and I are still friends.”

An example of the support that Wood provided is how he managed their training, according to McKeever.

“One of Dave’s strengths is in the physiology side of things,” he said.

“When we were going south to camps, Dave would put the athletes on the plane and we’d meet him down there. He would rather be flying but he knew that was the most cost-effective way to deliver what we needed by getting the equipment to the camp for us to do the training.

“When you see someone doing that, many camps a year, you can tell that he cares. He was trying to be as professional as possible with the budgets that we had and make sure we had the opportunities to do the proper work.”

Changing the mindset of a nation was paramount in improving its position in the cross-country ski world. And that’s what Wood attempted to do.

“I think the first thing was to accept that you could do it,” he described.

“You had to believe. I think we found at that time there were some younger skiers coming into the program that appeared to have good ability. Beckie Scott, Sara Renner, the Fortier sisters (Jaime and Amanda), and they were also motivated to work inside the team.

“We had a lot of support from CODA (Canadian Olympic Development Association now Winsport). We also had a great relationship with Dr. David Smith at the University of Calgary who was an exercise physiologist and we worked together a lot; we looked at different ideas and developed a totally different approach to preparation.”

After seeing the Canadians near the bottom of the results sheet at the 1998 Olympic Winter Games, the hard work delivered a different story the next time the world met for the five-ring circus.

“I think probably Beckie was the one who set the tone and they were following behind. To be fair to everybody, some are just better skiers than others, but everybody on that team worked as hard as anybody.

“If you look ahead to the Vancouver Olympics, George Grey was one of the best. He was top-10 in one event, he was top-15 in the 50km. Before the Olympics, there weren’t many people who thought he could do that and he did. He did it because he kept his nose to the grindstone; he worked harder and harder.  There was 100 per cent belief by all of them that they could get there if they did things better.”

Wood’s influence extended throughout every facet of the National Team unit.

“He turned the program around completely,” said Graham MacLean, whose association and indeed friendship has lasted some 30 years.

A former athlete who had been coached by Wood in the 1990s, MacLean was involved in the technical side during the National Team’s heyday, a key member of the wax team, as is Yves Bilodeau.

“Our international results in the ‘90s were not that great on the world stage and when Dave took over as head coach, he completely turned the program around,” MacLean continued. “He was pivotal in securing a lot of funding, improved the quality of the program and brought the level of the athletes up from the back of the pack to the front of the pack in four years, which is quite impressive.”

Funding for amateur sports can be a slippery slope and that was also an area that Wood took under his umbrella. One of cross-country skiing’s long-time sponsors is Bob Disbrow, whom Wood met in the ‘80s when Disbrow’s two children were involved in the B.C. program. His brokerage firm at that time sponsored the sport in the 1990s. In 2001, a trip to Salt Lake City for a World Cup event prompted an even greater association, given the potential on display.

“The following year we went to the Olympics and saw the great success of particularly Beckie and the relationship has continued since that time, both personally and corporately (through Haywood Securities),” explained Disbrow’s wife, Kim Kawaguchi. “You have to credit Dave for bringing us into the fold in that sense. If it weren’t for him, we wouldn’t have been there or be here today with ongoing support. 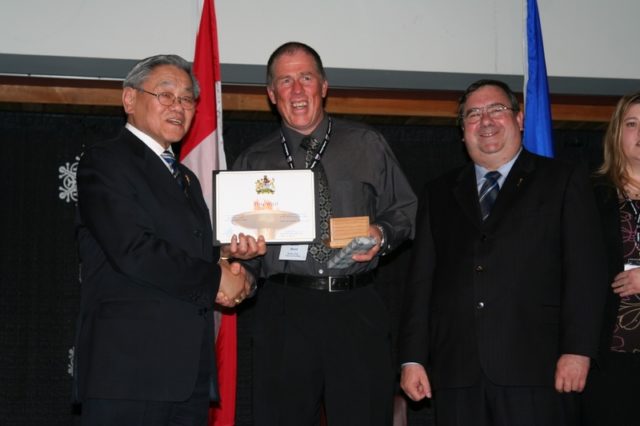 “The bottom line is we want to support the sport and see athletes (develop) from a junior position, move up through the ranks and be supported through the levels of skiing, whether the club level or national level.”

He may be retiring from the full-time coaching gig, but Wood will continue to share his vast expertise. He has been training Canada’s rising young star Remi Drolet for a number of years, and he will also mentor new coaches coming up at his local Rossland establishment, the Black Jack Ski Club.

The club is hosting a Haywood NorAm race next fall, and Wood plans to help out with that endeavour.

You can also be sure despite calling it a career, he will always keep an eye peeled on the National Team he helped shape.

“I think there is more talent in the system now than there ever was,” he concluded. “The athletes are in the system, and we have to make sure the support network remains for them to make things happen.”