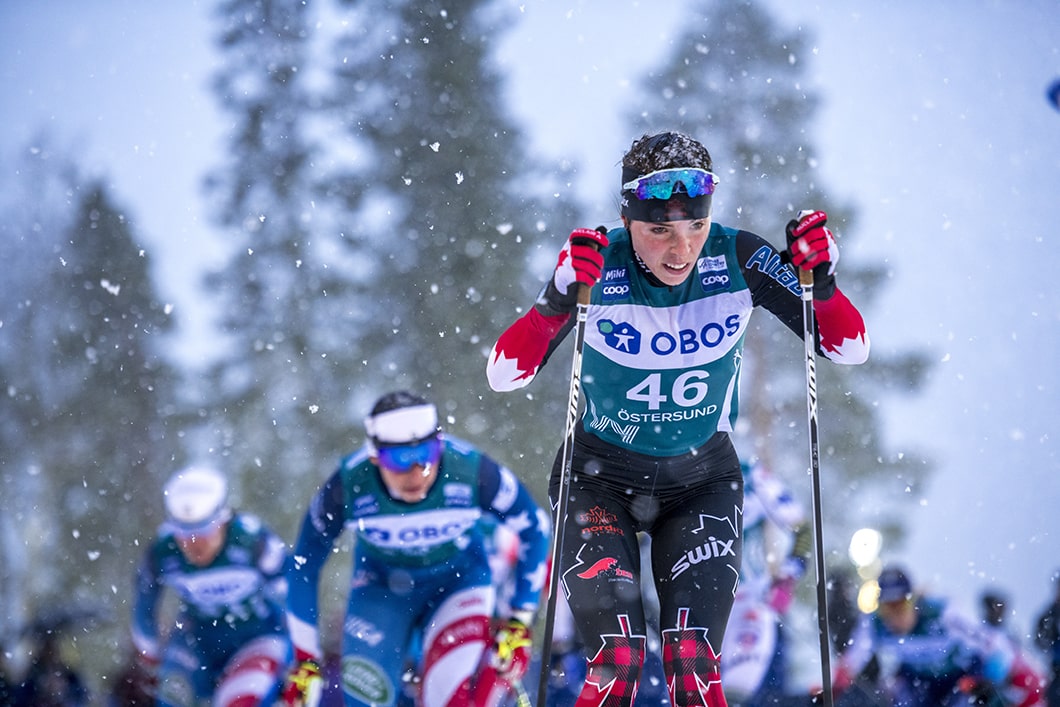 Gutsy Canuck delivers one of the best distance races for Canadian women in last decade, moves to 32nd

OESTERSUND, Swe.—Canada’s Katherine Stewart-Jones took one of the biggest jumps on the field after putting down the ninth-fastest time in the second stage of the six-race Ski Tour 2020.

Starting the women’s 10-kilometre classic-ski pursuit race in 46th place based on results from Saturday’s skate-ski race, the 24-year-old Stewart-Jones battled through extreme weather conditions in Oestersund, Sweden where she clocked a time of 30:06.5.

“I am really happy with today’s result. I had been struggling with my energy and race shape over the last few weeks so it’s a relief to be feeling myself again,” said Stewart-Jones. “I think the key to success today was just being in the right head space.”

The determined Canuck from Chelsea, Que., scrapped her way up and down the challenging 3.1-kilometre loop twice before putting a big move on the field in her final lap.

Posting the ninth-fastest time on the day from start-to-finish at 27:36.5 – just 11.8 seconds behind the quickest athlete to complete the 10 kilometre test – Stewart-Jones was one of three athletes to climb 14 spots up the standings after crossing the line in 32nd place.

“The conditions were interesting. It was pouring rain during our warm-up and then started to snow just before the race,” added Stewart-Jones. “The course had lots of climbs but also some long downhills with some good rest. I was focused on skiing well and pushing hard so I didn’t really know, or pay too much attention, to how I was doing. I had incredible skis today.”

After chalking up one of the best distance races by a Canadian woman in the last decade, Stewart-Jones will head to the midway point of the the six-race Tour that takes the world’s best through some of Sweden and Norway’s most famous Nordic and alpine ski centres, two minutes, 37 seconds behind the leader.

“There are still four races to go in the Tour, so I’m trying not to get too excited and just take this confidence and energy with me into the rest of the Tour,” said Stewart-Jones. “It’s exciting to see our women’s team racing so well in general. Each race we are fighting for the points. It’s been incredibly inspiring to watch my teammates set new standards for our sport.”

Three Norwegians stole the top-three spots on the women’s podium at the second stage. Therese Johaug was first at 27:29.0. Heidi Weng crossed the line in second place at 28:26.4, while Ingvild Flugstad Oestberg locked up third place with a time of 28:26.8.

Stewart-Jones is part of a new generation of young Canadians determined to carry the Canadian place back to the top of the international rankings.

“That was maybe one of Katherine’s best races ever today. She skied fantastic,” said Erik Braten, head coach, National Ski Team. “You can’t fake the ninth-fastest time of the day. This is super motivating for not only her, but the rest of the team to see this group of Canadian athletes can deliver these types of results. This should be a big confidence booster for her and our entire program for the rest of the Tour, and the season.”

After taking a break on Monday, the Tour will resume on Tuesday in Are, Sweden with a skate-ski sprint race.