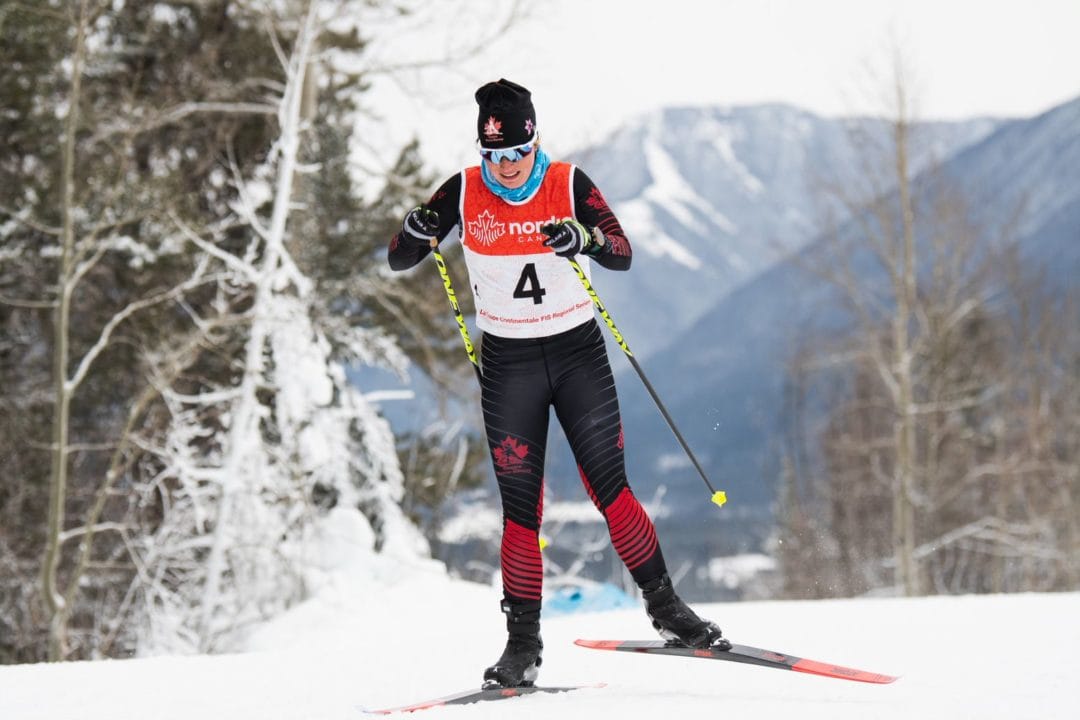 CANMORE, Alta.—Laura Leclair and Antoine Cyr made the first move, winning the Sprint Free races at Nordiq Canada’s Olympic and Junior/U23 World Ski Championships team trials which are being held in conjunction with the Alberta Cup in Canmore, Alta.

Fighting for one of the three remaining women’s spots on the Canadian Olympic Team, the 24-year-old Leclair battled through the cold weather while taking down all of the nation’s best skiers in the head-to-head sprint races.

“The Olympic Trials are super important races, and is my first time this year getting to race against everyone in Canada,” said Leclair, who qualified for the head-to-head heats with the top-30 athletes after posting the fourth-fastest time around the 1.3 kilometre course.

“My qualifier wasn’t exactly what I was hoping for, but I was just happy to get into the heats which were very strategic.”

The Chelsea, Que. resident exercised her tactics to perfection while crossing the finish line first in all three of her heats including the big final where she edged out her training partner and National Team member, Cendrine Browne, for top spot on the podium.

“I train with Cendrine all year, so I knew she was in super good shape, and I also know how well she skis,” added Leclair. “I’m really happy with this result. It definitely helps my confidence and I’m looking forward to the next two races.”

Browne put her fitness and fast skis on full display. After posting the top qualifying time on the slow course conditions, the 2018 Olympian from Saint-Jérôme, Que., won her opening heat before finishing second behind Leclair in both the semis and the final. Olivia Bouffard-Nesbitt, of Morin Heights, Que., took third place.

In the men’s sprint draw it was Antoine Cyr, of Gatineau, Que. taking top honours on the opening day of the prestigious cross-country ski trials.

“It feels really good to get the win,” said Cyr. “The qualifying wasn’t the best for me, but I felt better and better every heat. I was happy I was able to put it down in the final and come out on top. It was a lot of fun today.”

Already pre-qualified to be nominated to compete at the 2022 Olympic Winter Games thanks to his stellar results on the World Cup including 11th and 12th-place finishes in Ruka, Finland, the 23-year-old proved he is the man to beat on Canadian snow.

“I felt like all eyes are on me, and I still put a lot of pressure on myself to perform well in Canada,” added Cyr. ‘I think it was good. It was hard because it has been almost two years since we have done sprint heats at home. It was so much fun to race here against all of these guys that I know. I was so impressed by the level of athletes here in Canada. The level is so high, so it is really good racing.”

Qualifying for the heats in fifth place, Cyr won his quarter-final trek around the 1.3-kilometre track before securing a spot in the finals with a third-place finish in the semis.

He bounced back in the final, holding off the top-qualifier on the day – Russell Kennedy of Canmore, Alta. – in the sprint to the finish to take the victory.

Marielle Ackermann, of Kimberley, B.C., and Sasha Masson, of Whitehorse, won the Under 20 women’s and men’s sprint races.

Complete qualifying and heat results can be found here

Following a training day on Friday, the nation’s best will hit the start line for the 10- and 15-kilometre interval start classic-ski races which are slated for Saturday.

Nordiq Canada, Nordiq Alberta and Foothills Nordic Ski Club, have decided to proceed with a modified version of the Olympic and World Junior/U23 Championship Trials set for Canmore Nordic Centre Provincial Park while continuing to monitor the status of the COVID-19 pandemic, provincial health guidance and restrictions. COVID-19 protocols and adjustments to the race schedule have been implemented in a continued effort to mitigate risks associated with the ongoing pandemic, and to provide a safe and fair qualification opportunity for all participants.

Taking every effort to ensure the health and safety for athletes, coaches, volunteers and officials, the Local Organizing Committee at Foothillss Nordic Ski Club and Nordiq Alberta has created race cohorts for each of the athlete groups. Open Women and Open Men will race separately each day followed by a break before Alberta Cup age group competition sessions begin.

Athletes must Arrive, Train/Compete, Depart, limiting time spent at the venue. To further reduce contact, media and spectators are discouraged from attending the event. Nordiq Canada will honour all media requests virtually, or by phone, following each day’s competition. Spectators can follow the excitement from home.