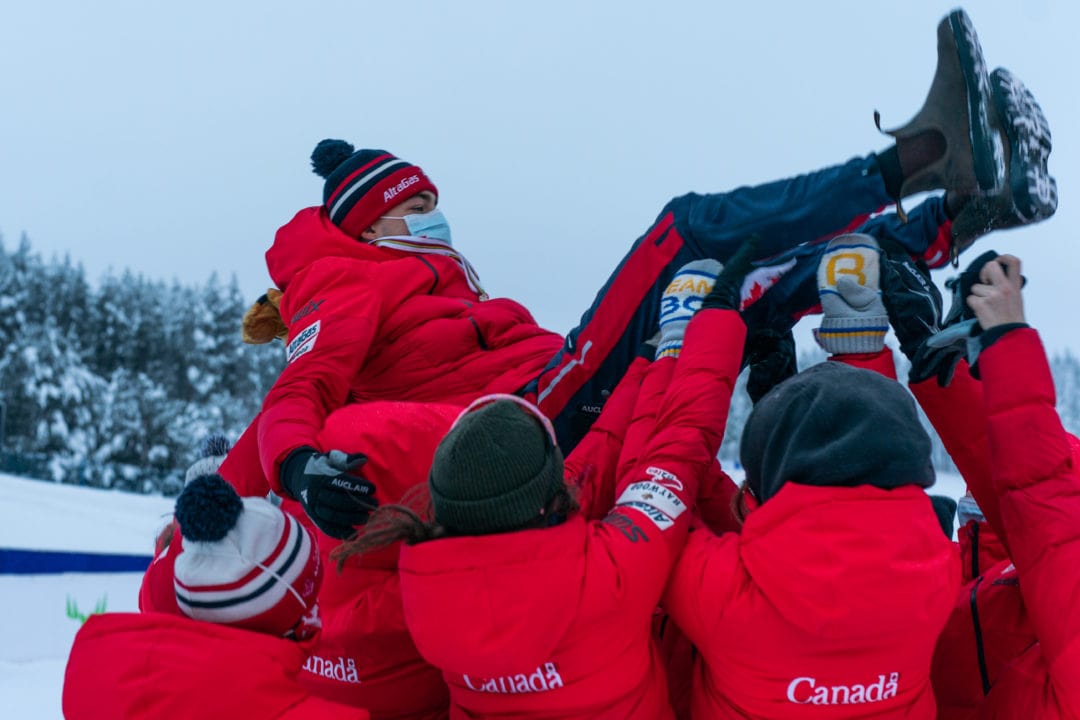 At the finish line of the World Junior Championship individual start 10-kilometre skate-ski race on a frosty mid-February Finnish afternoon in the village of Vuokatti, national team coach Erik Bråten had a piece of Jeopardy-style enough-to-warm-your-heart trivia for one of Nordiq Canada’s emerging talents.

“Erik told me: ‘Only one other guy has done this before, win an individual medal at this level. I think you might know his name’,’’ recalled 19-year-old Olivier Léveillé, from his post-Nordic World Junior Ski Championships home base of Sherbrooke, Que. 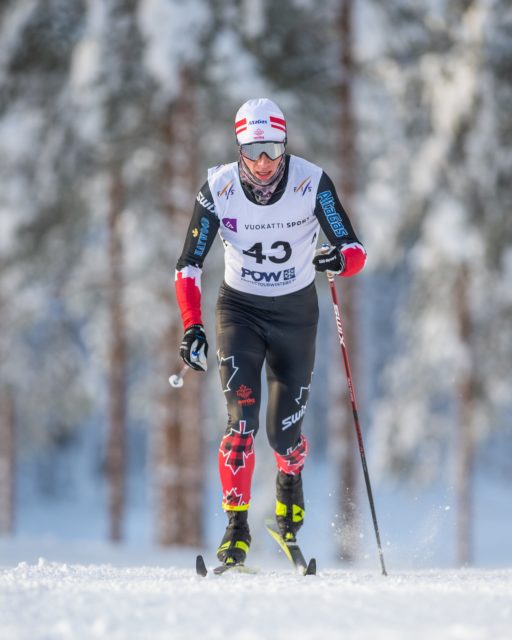 “Did I know his name?’’ parried Léveillé playfully. “Oh yeah, I knew his name.”

Another Quebecer, Alex Harvey, of course, being the gold standard for all present and future male Canadian skinny skiers, a five-time senior FIS World Championship medallist who also made four trips to the Junior and Under-23 World Championship podium before going on to chalk up more than 32 World Cup podium appearances and seven victories on his formidable resume.

Léveillé, back home from the 2021 World Juniors and restlessly going through COVID-19-mandated no-skiing quarantine, was still two weeks later wrapping his head around the bronze-medal time of 24:53.9 – the third ever medal by a Canadian, joining Harvey and Marie Josee-Pepin, in an individual World Junior Championship event.

As he eagerly awaited the opportunity to get back out on skis and continue the momentum built up in Finland, Léveillé’s bronze medal was always close by, on a bed-side table in his room.

The first of many on the international stage, both he and Canada can hope.

“At first, I didn’t believe it,’’ Léveillé confessed. “It seemed so crazy to me. But now I’ve come back to reality.

“It means so much. In terms of incentive, of motivation.

“Of being able to dream.”

A vital component of those unfolding dreams moving forward into a bright new horizon for international cross-country skiing in this country is the performance-bonus program initiated by Nordiq Canada to help lessen the often-crippling financial burden of high-level amateur athletic travel.

“We’re embarking on a new era with an exciting group of young athletes coming up,’’ says Nordiq Canada high-performance director Kate Boyd. “How do we get Canada back on the international podiums? Striving for success, raising the bar around performance, what are good and excellent, to get us as a team where we want to be.

“It’s an expensive endeavour right now. Athletes are paying. All sports have fees to some degree or another which varies from sport to sport.

“In an effort to try offset some of those fees, the incentive performance-benchmarks were put forward in recognition of – Top Six your entire trip fees are covered, a Top 12 is 75 per cent and a Top 20 finish is 50 per cent return.

“We’ve had eight athletes achieve those benchmarks – some more than once – across the Junior and U23 World Championships, and the World Cups. That’s exciting because it is not something we’ve seen in recent years. And we’re looking forward to more. We’ve changed our National Ski Team criteria so it’s very clear in terms of the performances you need to hit in order to be named to the teams.

“We’ve had some great results this year. The finish in the team sprint at the World Championships, for example, was super-exciting. I mean, the performance bonuses are based on individual results, but to see two U23 guys (Graham Ritchie and Antoine Cyr) racing against the best in the world and finishing not too far off the podium in seventh place? Okay. That’s really positive.

“Olivier’s bronze was great. His World Junior teammate, Tom Stephen, also had three really consistent races at World Juniors – a Top 12, a Top 10 and a Top 5.

“So, there’s some solid talent in our system. The question is: How do we best support that?” 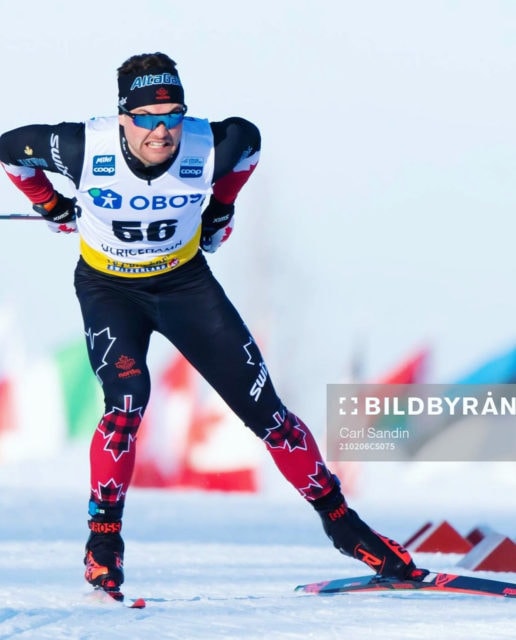 The performance bonus initiative can certainly be considered a solid beginning.

“When I first heard about it, I was happy, naturally,’’ said Léveillé. “I guess it did put a little bit more pressure on before the race.

“To know my federation will reward me if I do well … that’s pretty nice. A really good idea. I hope they do it for the next athletes and in future years of competition.

“I mean, I couldn’t say I was thinking about it during the race. But afterwards, of course you do.

“The fees for a trip to the World Junior Ski Championships are pretty high and the cost is always on your mind. To have that out of the way, I can focus more on training than worrying about finances for next year.

“It’s a great way to motivate and it helps you concentrate more on the training.”

Parry Sound, Ont.’s Graham Ritchie, meanwhile, has cracked the performance-bonus threshold twice, thanks to a 17th at the Ulricehamn World Cup sprint and a 20th at Vuokatti in the 15km, as has Tom Stephen with his two, top-15 finishes at the World Juniors.

“I think it’s a great initiative for sure,’’ enthused Ritchie. “Obviously we are out here trying our hardest no matter what, so it is more of a nice bonus when you race well rather than helping drive performance before the race.

“I think it might motivate me a little more, but honestly I was pretty motivated to begin with, so I really look at this as more of a great relief after the race when you know you’ve earned that bonus.

“But I do think the performance bonusing is very beneficial for us athletes. For me personally, I appreciate every extra ounce of financial support. I wouldn’t be able to do what I love every day without it.”

Other skiers are edging ever closer.

Cendrine Browne of Saint-Jérôme, Que., for instance, has enjoyed her best ever season recording a string of Top 30 results including 23rd and a couple of 27th place finishes at the senior World Championships in Oberstdorf, Bavaria, Germany. 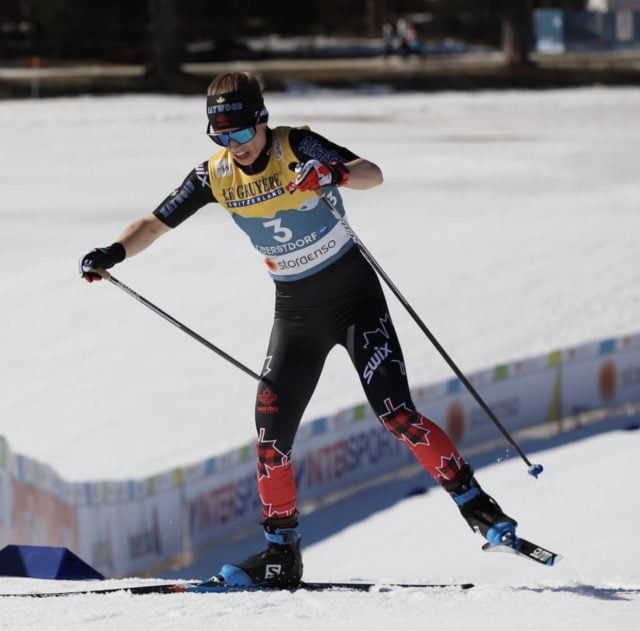 Browne’s 23rd led a contingent of three Canadians into the Top 30 in the two 15-kilometre skiathlons for the first time at Worlds in nearly a decade. Katherine Stewart-Jones of Chelsea, Que., placed 28th in the women’s race and Cyr 27th in the men’s.

“We feel like we’re building something great here and keeping the momentum going,’’ said the 27-year-old Browne, who wore the Maple Leaf at the 2018 Olympic Games in PyeonChang. “It’s very motivating to be part of this women’s team. The guys have had good results, too, so there’s a real positive environment right now.

“With all the changes at Nordiq Canada, it is the start of a new dawn and it’s great they’re trying to make things easier for us, being on the World Cup and having so many fees to pay.

“It’s a start. I’m not on the national team this year so it’s really, really been hard for me financially. Right now, you absolutely have to make Top 20 (to reach bonus money). For sure I was hoping for that and I still have some races to do it.

“So, as I said, it’s a good start but we need a little more than this to be successful. I think we’re heading in the right direction and I’m looking forward to hearing more of their new ideas.”

That new dawn Cendrine Browne spoke of, with an eye fixed on the future and the Milano Cortina 2026 Olympics and beyond, is only just now beginning to come into focus.

“It’s not to say it’s not open to everybody but when you hit the benchmarks, that’s when it kicks in.

“I think with the performance bonuses, with the clarity of the criteria, it’s about showing that pathway I mentioned. They can see it on paper and then they can see it in the support or on the teams that they make.

“So, there is something to strive for.”