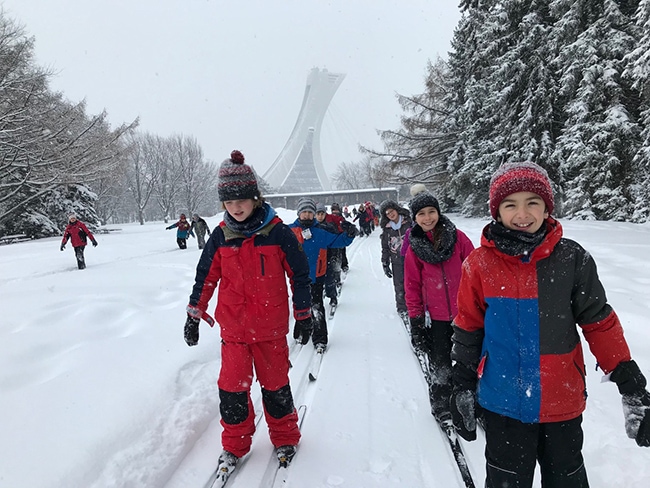 Note: This story was produced prior to Stéphane Barrette being named acting CEO of Nordiq Canada

Montreal is known throughout the world as a stylish, cosmopolitan city.

What may not be universally known, though, is that it’s become an urban hotbed for cross-country skiing.

Immediately west of downtown, the hilly park known as Mount Royal serves as a destination for local aficionados who love to strap on the skinny skis without the long drive.

With the weather ideal most winters, roughly 200,000 Montrealers take to the trails, whether twice a year or every week, and Ski de fond Montreal has become the great facilitator.

SFM isn’t a club in the traditional sense of the word; it doesn’t own the land or take care of the facilities on the hill. It is an organization, which was incorporated in November of 2018 and began activities a year ago, that is making the cross-country experience an accessible one for all. And by all, we mean all.

“There was no strong group to represent that voice of all the skiers on the island,” says Stéphane Barrette, the instigator of the project. “That was one of our main mandates when we started. We put together a survey about Montrealers’ appreciation of Montreal’s trail network and disseminated it through various social media means and have developed a relationship with the city of Montreal.”

Barrette is also Nordiq Canada’s director of coaching and athlete development, and was recently named as acting CEO for the national sport body.

“It was my own initiative with the help of some friends to constitute the original board,” Barrette says, explaining the genesis of SFM. “The goal has been to basically establish not just a club; that has a limiting scope. We never use the term club. One of our first mandates was to be a hub for representing all cross-country skiers in all shape or form, age, gender level, on the island of Montreal.

“Montreal is the most nordic major city where there is sufficient snow, where we have a genuine winter. There are 200km of groomed trails on the island of Montreal for cross-country skiing. There’s probably no other major city in North America in that situation.”

The city of Montreal operates the trails and there is no fee to ski. Barrette envisions a Facebook- or Google-like model, where a vast membership at very low cost will go a long way in garnering sponsorship and advertising.

“We kind of have the same vision but it has to be put in perspective,” he points out. “Let’s say we get 10-or 20,000 members … that would probably be big enough to be quite appealing to prospective sponsors, local or provincial or even national. That’s what we’re testing as a theory.”

SFM also acts as an advisor to the city in terms of what is required for the ideal cross-country experience.

“Mount Royal is by far where people go to ski the most,” Barrette explains. “It has hills so there are some safety considerations in terms of how the trails interconnect. There has been a number of chronic deficiencies in terms of trail safety so we’ve come up with a list of recommendations for signage. It’s not just the quality of grooming but also from a safety and risk management perspective that we’re being a help to the city of Montreal.”

The organization offers weekly night practices, for those 10 years and up, in spring, fall and winter. Masters skiers will often join the elite junior skiers. Adults just looking to improve their technique and fitness as well as beginners are all welcome.

“There are so many people that want to stay fit,” says Erika Ladouceur, who has been coaching with SFM since the fall. “If you just want to beef up your technique and become a more efficient skier, so you can cross train for your running, we have programs for that. We have private sessions; even in an hour a runner thought, oh my goodness, this can be a good workout.”

In this novel template, Ladouceur – who has also coached kayak and rowing, among other sports – has had to go outside her comfort zone.

“I’ve been mostly in clubs that aren’t downtown so for me it’s a very new experience,” she notes. “I was with a club north of Montreal two winters ago, so I was a little hesitant about how it would work. But I’m very impressed. The number one thing that stood out for me is to keep everyone keen and motivated you have to be creative. You can’t just do the same training; you’re confined to a certain space.

“I didn’t realize Mount Royal was that big. However, the challenge becomes the temperatures, the quality of the ski trails. You end up realizing that as long as you’re mixing it up and coming up with creative training, you don’t need kilometres and kilometres.

“The kids do get a little feisty,” she chuckles. “I’m looking next year to do a few more day trips, mix it up, but over-all what I’ve noticed is you end up having mostly athletes that are keen and want to be there and want to excel. For the rec, it’s passion. I feel like it helps weed out those families who are just going to throw kids into a program. What I’ve discovered in Mount Royal is the families go there to escape the city. I find that’s been my biggest ‘ah ha!’ moment.”

Kids, understandably, make up a big part of the programming. One such program teams with a provincial multi-sport organization that manages school sport and SFM introduces cross-country skiing to those students. That takes place in a park right by the Olympic Stadium and this past winter, 1,800 kids took part in 71 sessions.

“I don’t think we could have expected a lot more,” Barrette says of the first season. “Interestingly, the core group we had to launch the organization was more of a junior elite group from a club in the Laurentians. If you are a ski racer from Montreal, you had to join a club from outside the region. As a coach in Montreal, I was helping these athletes to be able to train weekly because it’s just not possible to think about jumping in a car and driving kids after school in rush hour to Saint-Jerome or wherever.

“That’s also something that is really special with our club. If you are a racer, you don’t have to represent Ski de fond Montreal at races. We provide coaching services for other clubs as well. Going forward, we’re going to offer full racing services. We know we’ll have more experienced and maybe senior age racers this year.”

Ladouceur, who grew up in Quebec but did a lot of coaching in British Columbia, in the Victoria area, is still coming to terms with the peculiarities of the urban setting.

“I think the tricky thing to wrap your head around – and that was for me as well – was simple things like parking,” she says. “If we do the training at the bottom of the hill there’s street parking. If you do it at the top of the hill, then you’re paying for parking. There are silly things like that. I grew up at a club in B.C., totally in the woods, and people have this vision that cross-country skiing is that.

“It’s a community; the biggest thing for me is the family. This is the first club I’ve been in a long time that feels like family. People that very much want to be there and want to help.”

Whether other major centres follow SFM’s lead is anyone’s guess. Barrette wants to get this one right first.

“It’s a little pilot project,” he says. “I bring it up as a different model and also a business model. We hope to demonstrate that it’s working and that we can strive with this kind of model before reaching out to other clubs that it could be something for them. One step at a time. If the model proves sustainable in another two years, then by all means, why not share this option with others.”