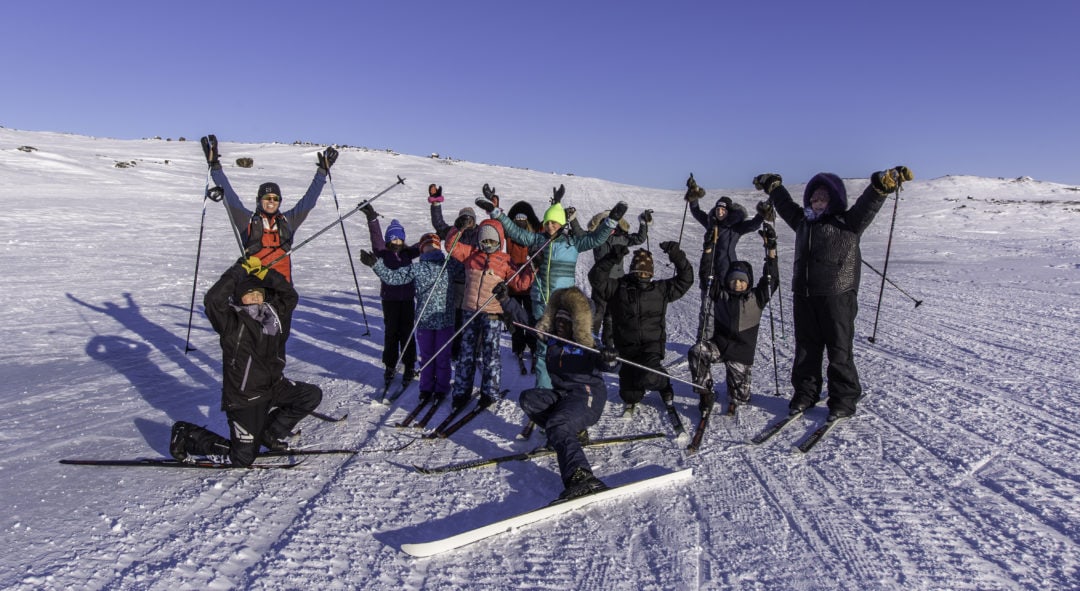 Tracking Dreams Towards a Healthier Lifestyle in Canada’s North

He spent a spell as a reindeer herder up in the wilds of northern Russia; over two decades ago, his younger self set out on a wildly ambitious, three-year Paris-to-Montreal bicycling trip with $280 in his pocket and faithful dog Misha along as sidekick.

He’s conducted over 1,000 lectures to school groups on the benefits of activity aligned to the outdoors and worked alongside Nordiq Canada instructors on how best to deliver the cross-country ski message.

Benoit Havard, then, can safely be considered something of an authority on the benefits of outdoor adventure dreaming for the young. 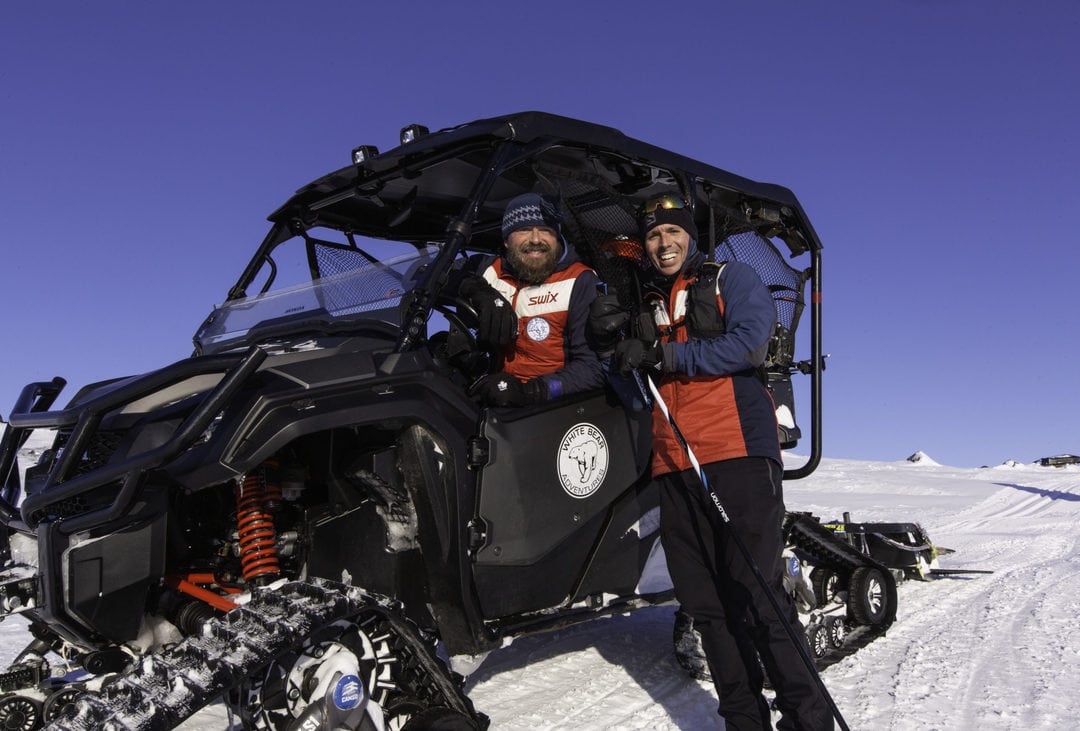 “I try,’’ explains Havard, the son of a Montreal policeman, “to make them dream whatever they want to do in life. This is so important.

“My whole life I’ve worked with youth. I’m from a background where the door was locked and I was not able to get in the house all day because we had to be out there, we had to play outside. I like to think that maybe I’m making a difference in a life. We all gotta go through challenges. And if we’re equipped with a healthy way to cope … my God, that’s the best medication.

“When I was a kid, I had cerebral paralysis on my right side, and I would watch the other kids running and playing and I couldn’t do that. For me, it became essential to do this in my life. I told myself: ‘That’s how I’m going to be able to make my life better.’

“Today, we see more and more kids staying inside. As a skiing instructor I see that kids are less and less co-ordinated, not as physical as they used to be. We’re trying to change that.

“You’ve got to try and live your dreams. Anybody, for instance, can go around the world by bicycle in the winter, through Siberia, with a dog, if they so choose.
“I did.”

As a guide/instructor for his White Bear Adventures initiative (so named because “for me, the bear is associated with courage, wisdom and strength”) Havard has, through his collaboration with a pair of local Iqualuit schools – Joamie Elementary School and École des Trois Soleils – partnered with the Aniirajack Cross Country Ski Club in helping spread the joys and benefits of skinny skiing in the far-flung Nunavut capital, pop. 7,200.

The Aniirajak Club currently counts 44 female and 38 male memberships. But the aim is to build out from that base and tempt more people into taking fuller advantage of a place where the natural splendour alights virtually wherever the eye rests.

“The technical and physical curve for kids meets at between 8 and 12 years old,’’ Havard says. “That’s the crucial moment if you want to make them life-sport people. 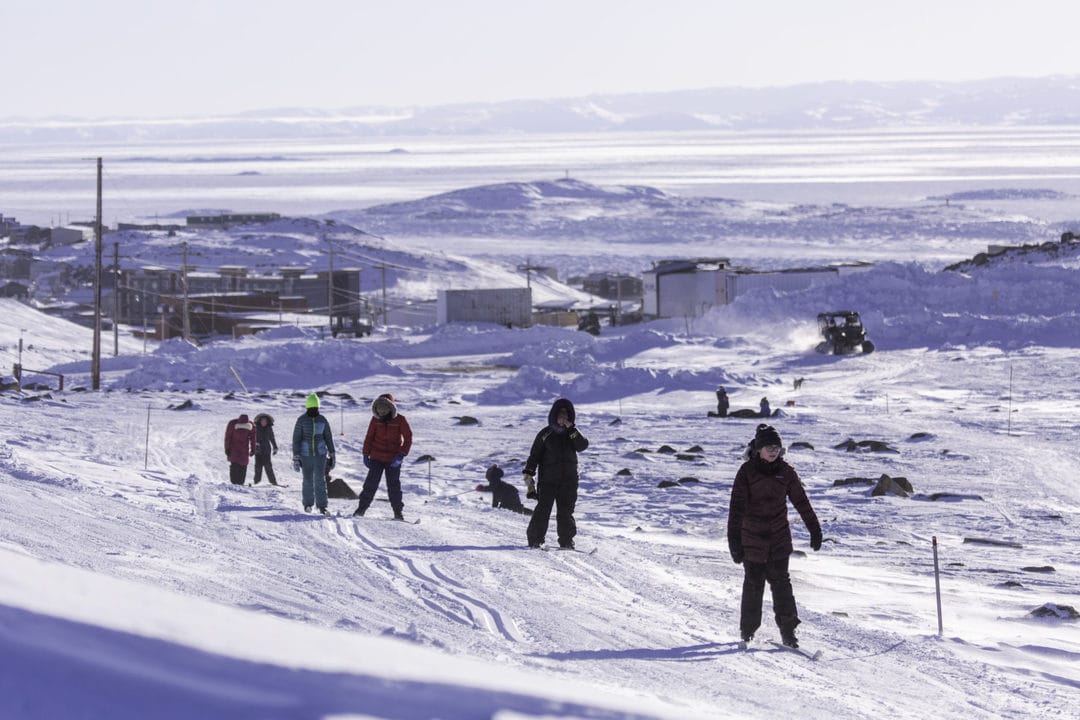 “You have to establish an infrastructure. You can’t just do this from a storage container.

“You don’t open a door, nobody’s going to come in, right? You must establish a need, a demand. Why do people play hockey? Because there’s an arena.

“We need to put energy into developing trails and trail-heads. You have to make sure all the kids have access to equipment; that they can sign up for a team or races. You build the community like this.”

The Aniirajak has made inclusion for all a priority.

“For example, five years ago when we named the club, we chose Aniirajak, which means ‘playing outside’,’’ notes club lead/division chairperson, François Fortin. “We recognize that being in Nunavut we are on Inuit land.

“It can be a challenge to get Inuit involved in the club as it’s not a traditional activity for them and given all the fees that can be related to it, so in, say, our Jackrabbit program we always have a few sponsor spots. What has happened in the past, people sponsor a family, they go pick up the kids, bring them to the club and those kids participate in the program.

“Besides the Inuit, French and English kids, we’re seeing more and more African of descent and other cultures, too. A lot of new immigrants to Canada.”

The more the merrier, in Havard’s view.

“Wherever you’re from, whatever your background, Inuit, French, English, whatever your colour or your origin … my approach to skiing is not so much the technique or to be good but to have fun. Who doesn’t like to have fun? 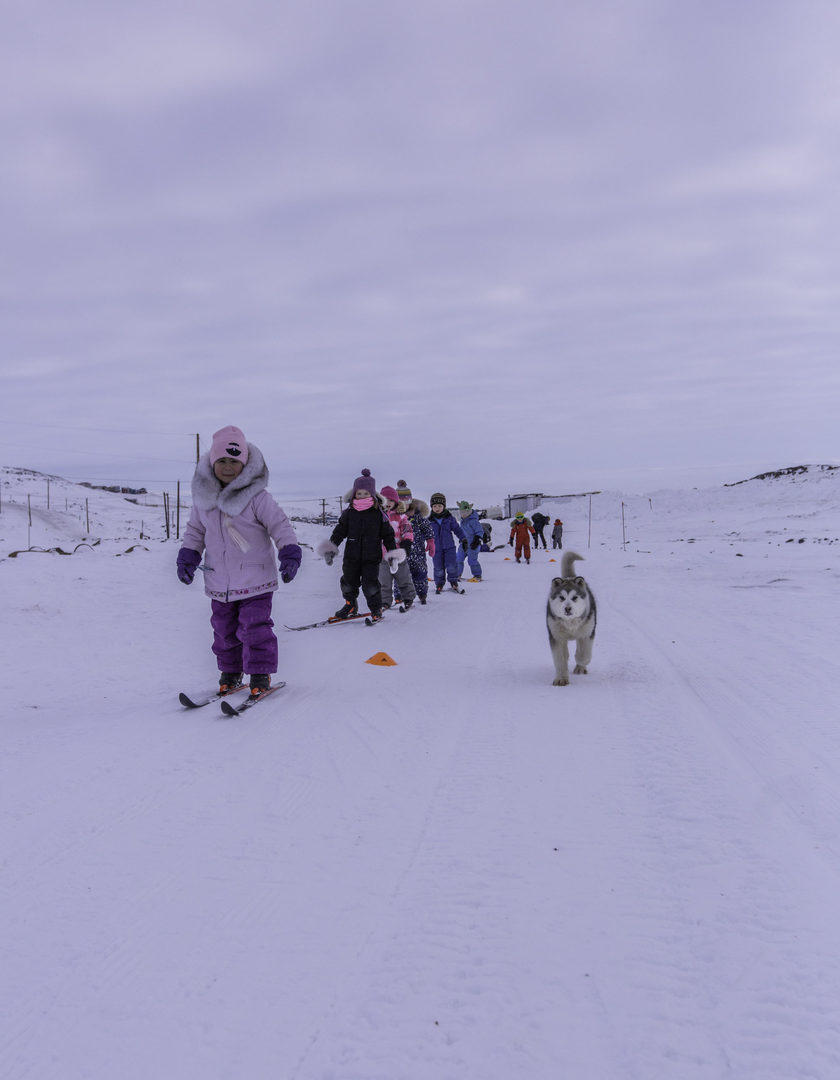 “The Joamie School is more Inuit kids, and this year they signed up for all levels, like my French school. So, I’m going to be teaching cross-country skiing every day, from March to May. They want more training, they want competition.

“I did a ski park where they can challenge themselves at every level they want. So, in this park, I just let them loose and observe what they do.

“We do little games, songs. We have hot chocolate, we have the shack with a wood stove. A comfortable set-up. And it’s not misery. I try to take care of them.

“You have to put them in an environment where they will say: ‘Hey, I can do that. I’m able to go down that hill without falling.’ Or: ‘I’m able to stand up after I fall.’ 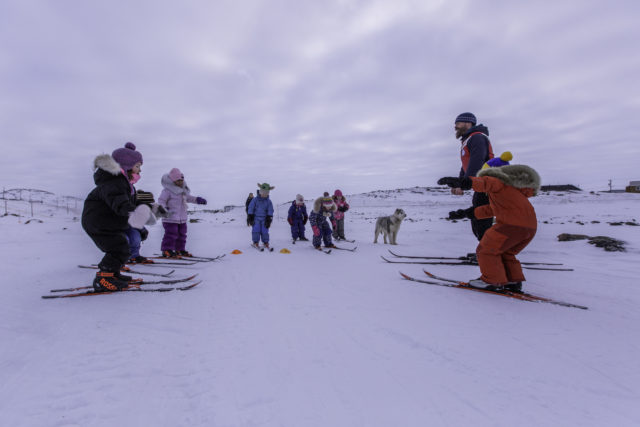 “My favourite groups are the Kindergarten kids. I love this. This week I have two groups of Kindergarteners. I can’t wait. Before they were falling, with a bare knowledge of how to stand up. Now they go down hills. It’s amazing to see the physical development in kids.”

The cross-country culture in Nunavut is only now beginning to regain traction. Years ago, a skier, John Unjalaq, and his wife Rhoda, started a program aligned with schools that proved an unqualified hit.

“People,’’ says Fortin, “were introduced to skiing and really loved it; but when this guy stopped it all fell apart, completely disappeared.

“So, we’re kind of starting from scratch.

“We’re growing every year, though. Last year we organized for the first time an inter-community event, in partnership with Arctic Bay.”

Aniirajak currently rents gear and has trouble keeping up with the demand. 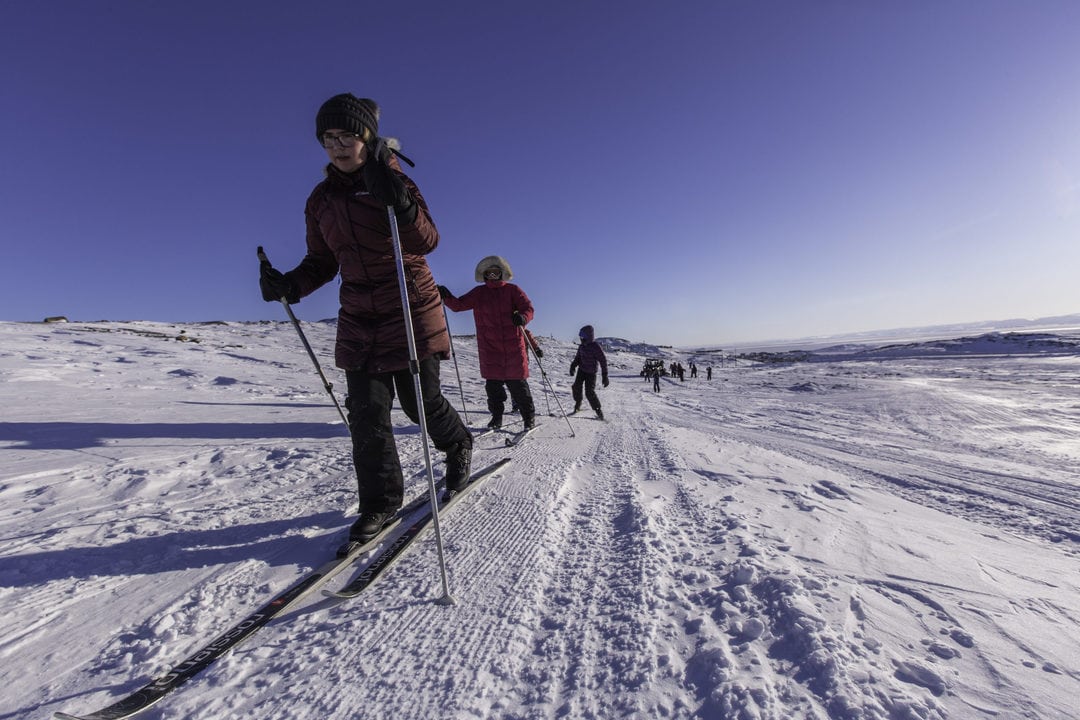 “It’s a challenge,’’ acknowledges Fortin, “because we really don’t have facilities. Everything is temporary right now, really hard to find permanent land on which we could build. Right now, we have a structure of containers and a temporary land-use permit with the city. So, we have fun there. One container we use for storage, the other belongs to Benoit, our partner, about 40 feet long, doors and windows, and heating inside.

“So. it’s really like a little clubhouse. It’s great.

The cross-country ski fraternity is also drawing from the local 795 Iqaluit Squadron of the Royal Canadian Air Cadets, who have created a vibrant biathlon program.

“They are good at shooting, but not so good at skiing,’’ reports Fortin, “so we want to partner more and more with the Cadets program. We help them get better at the skiing aspect. In Arctic Bay, I trained their team and they’re super motivated.

“We want to build something that will stay, for everybody; try to communicate the passion for skiing to everybody.

“We kind of lost a little bit with momentum with COVID-19. But the season’s just starting for us, really. The biggest months are April and May.”

And, the hope is, the biggest, best days lie ahead.

“The vision,’’ sums up Fortin, “is three-fold – one, get as much of Nunavut on skis as we can. Then, second, groom athletes to go to major games, the first being the Arctic Winter Games in two years’ time.

Third, we want to organize biathlon and ski competitions to build an event in Iqualuit every year that would attract kids and people from around Nunavut but eventually Canada.

“And, maybe, the world. We think there’s potential for that. We have such a beautiful, unique place here, so if we can get the community organized and involved for a big event. The season is longer here, too, as I said, so we could hold an event after the others.

Dreaming, as the ultra-enthusiastic Benoit Havard will remind you, being a universal gift, accessible to one and all. 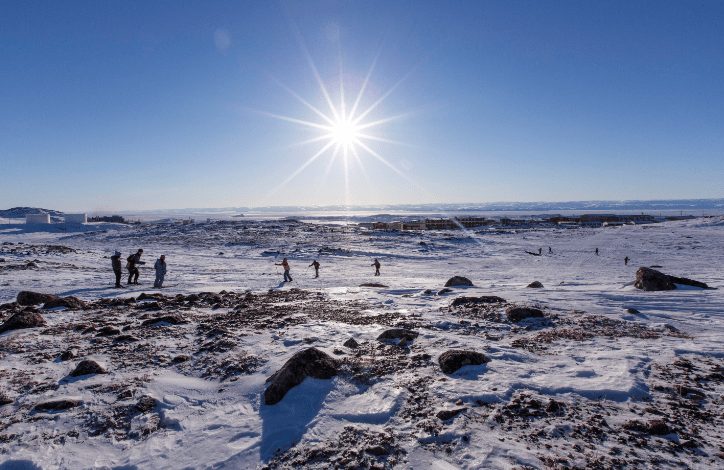