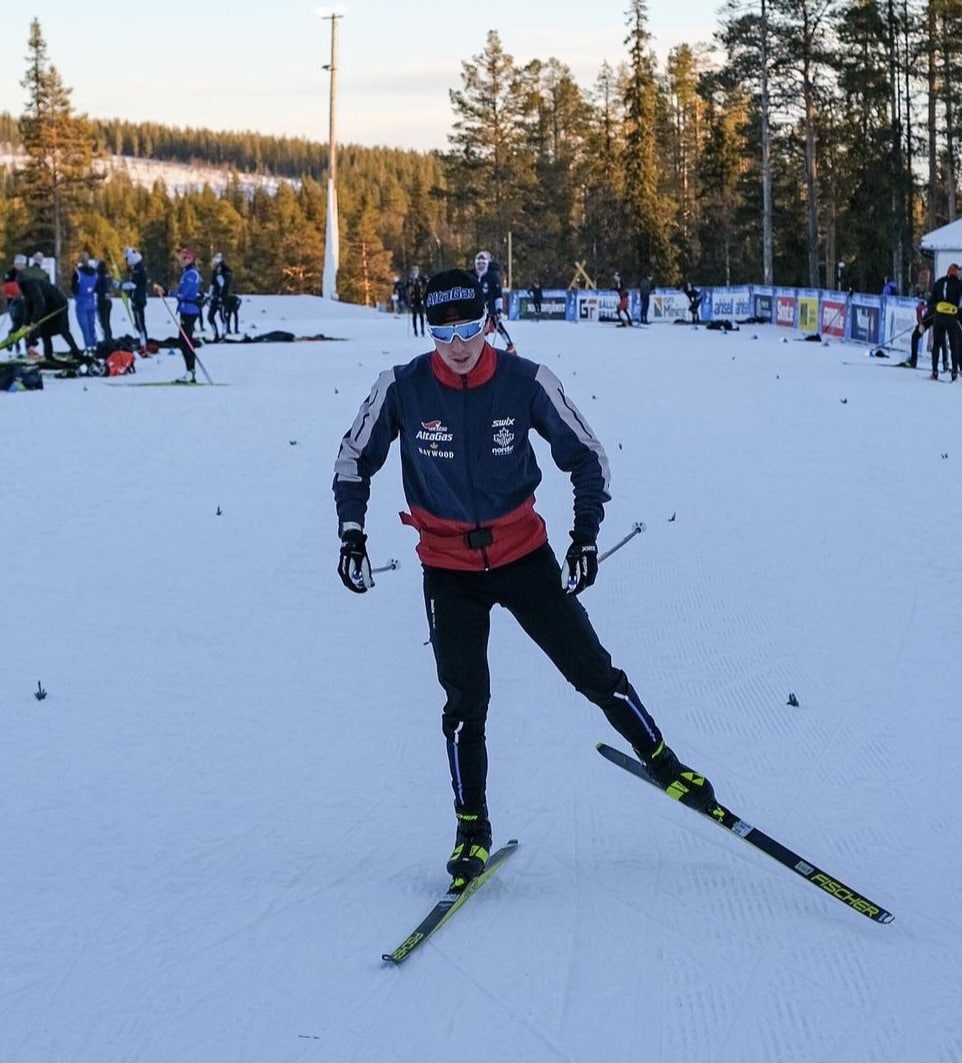 GAELLIVARE, Swe.—Xavier McKeever completed a Nordic hat trick of victories at the Gaellivare Ski Festival in Sweden on Sunday after dusting the field in the junior men’s 15-kilometre skate cross-country ski race.

The Canadian teen was rock solid while powering through three, five-kilometre laps in his mission for gold while racing above the Arctic Circle. McKeever, of Canmore, Alta., clocked a winning time of 33:01.5.

“This is my first skate distance race of the year, so I really had no idea how I’d fair. I just wanted to give ‘er. I’m so stoked with how things turned out,” said the 18-year-old, who trains out of the Alberta World Cup Academy at the Canmore Nordic Centre.

McKeever hammered the pace up the long, gradual climbs, and down the tricky, slick downhills to finish nearly 90 seconds ahead of the next best athlete.

Driven for proficiency in all race disciplines, the rising star showed his off-season training is paying off with victories also coming in the sprint race and 15-kilometre classic-ski individual start over the weekend.

“Overall, I had three solid races this week. There are still some things to improve on technique wise, but it is great to get the season underway and see where the shape is at,” said McKeever, who will return to Canada this week to continue his training and racing domestically.

With his Olympic and Paralympic family bloodlines well documented, the newest McKeever to arrive on the international race scene had an additional weapon in the toolbelt – his Uncle Brian McKeever, who is a 17-time Paralympic medallist – helping him prepare for battle each day against Sweden’s top junior skiers.

“It’s so great for me to have Brian around. He is super supportive, and just has so much knowledge so it is awesome to have him around us,” said Xavier McKeever. “He has helped me test skis the last few days. I used a pair of his skis in the sprint race and tried a pair today as well to choose the best skis I can. He is so helpful to all of us and generous with lending us (younger guys) his equipment. But I also know once you get on the racecourse, it is all you.”

Putting his own off-season training to the test in preparation for the Para World Cup season, which kicks off at the Canmore Nordic Centre on December 4, Brian McKeever finished in the middle of the pack in the open men’s skate-ski race on Sunday. A five-time Paralympian and only winter athlete ever to earn a spot on the Olympic and Paralympic Team in the same year, clocked a 54th-place time of 34:34.0.

The 42-year-old has extended his wisdom to members of the National Ski Team far beyond his nephew. With all Para races cancelled last year due to the COVID-19 pandemic, the Paralympic legend lent his time and expertise to Canada’s rising stars in the sport at the 2021 World Juniors as a member of the wax and ski testing team. His efforts contributed to a bronze-medal triumph by Olivier Léveillé.

On Sunday, Brian McKeever gave another one of Canada’s hot prospects, Remi Drolet of Rossland, B.C., a boost of support by lending him a pair of race skis. The 21-year-old, who is taking a year off from his studies at Harvard University to chase his Olympic dream, led the senior Canucks for the second-straight day in 16th spot with a time of 33:16.1.

Ottawa’s Pierre Grall-Johnson was the only other Canadian in the field on Sunday and skied to 47th place at 34:15.7.

A trio of Swedish athletes swept the open men’s podium. Leo Johansson set the time to beat at 31:46.5. Jonas Eriksson was second at 32:00.7, while Fredrik Jonsson finished 20.2 seconds off the leading pace to claim the bronze medal with a time of 32:06.7.

Meanwhile, over in Norway, Katherine Stewart-Jones put on a race bib in Beitostoelen for a women’s 10-kilometre skate-ski race. Stewart-Jones, of Chelsea, Que., punched the clock at 23:35.2 in her final test before the World Cup season to finish in 11th spot.

“The classic race (yesterday) was a bit of a struggle, but I felt much better today in the skate, both technically and physical,” said Stewart-Jones. “It feels good to get some competitive racing in and some of the nerves out before the first World Cup weekend in Rukka. I am looking forward to more racing!”

Three of Norway’s best claimed the medals on Sunday. Therese Johaug skied to the top of the podium with a time of 21:54.4. Heidi Weng was second at 22:29.8, while Ragnhild Haga stopped the clock at 22:39.5 for third place.

The World Cup season begins next weekend in Rukka, Finland.