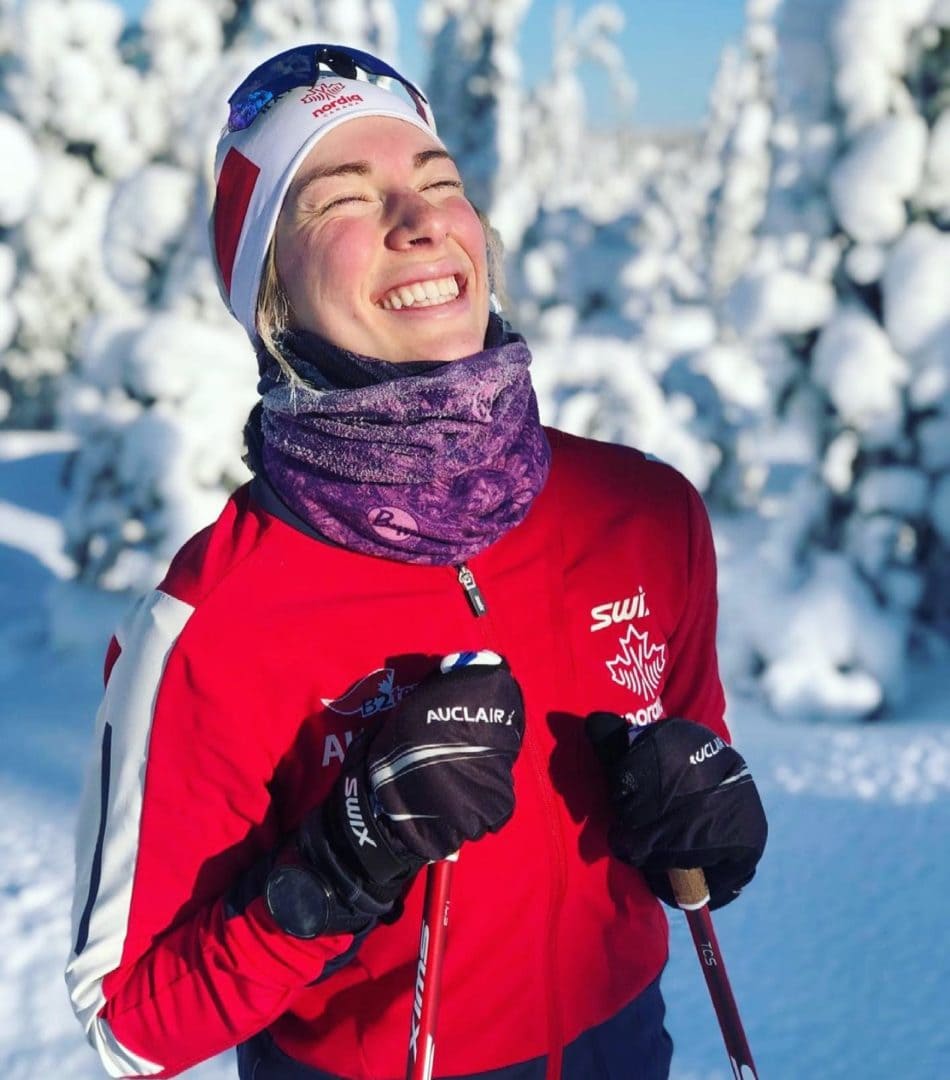 The Whitehorse resident topped yesterday’s career-best distance performance by eight spots after finishing the rare point-to-point skate-ski pursuit race from St. Moritz to S-chanf in a time of 1:30:15.2.

“Today was awesome. It was so much fun skiing in a big group like that,” said Beatty. “I caught the first chase pack, and it was fun to have so many women to ski with. I finished strong but had nothing left at the end. I can’t think of a better way to finish the season.”

Starting one minute, 16 seconds behind the leaders based on Saturday’s 10-kilometre results, the 27-year-old Beatty powered her way through a strong headwind and a dusting of fresh snow to post the best individual performance by a Canadian cross-country skier in this condensed season due to COVID-19.

“There was a small gap to a big group of girls that I bridged early, and then tried to hang on to that pack of 15 through 27. The goal was to ski in that pack and hold on and see what I can do,” said Beatty, who added the heavy winds made it critical not to be caught left out skiing on your own. “We caught the pack ahead and were in a large group of about five to 22.

“I took a few turns leading. The race ended with a big climb which broke things up. I gave it everything I had and was suffering on the downhill to the finish, but I knew what number I was at. When you are fighting for the top you have a little more dig and I just gave it my all.”

It is just the second time ever that Beatty has posted a top-15 result on the World Cup, and it was her third top-30 finish in a distance race. The 2018 Olympian first introduced herself to the world five years ago when she sprinted to 15th spot at the World Cup Finals in Canmore.

Katherine Stewart-Jones, of Chelsea, Que., put it all on the line while making the biggest jump of the day for the Canucks. Starting in 44th position, the 25-year-old hammered the pace, picking off 20 athletes in her trek across the Engadin Valley to finish 24th with a time of 1:32:29.1.

“I made a mistake with ski choice yesterday and struggled with my glide so was frustrated with how things went but I knew I was feeling good, so I channeled that energy into today’s race,” said Stewart-Jones. “It was a cool race, definitely different than what we are used to on the World Cup.

“It was flat and slow conditions, so it was a pack race where strategy mattered a lot. I just stuck behind my pack until it started climbing with three kilometres to go, and then I followed (Ragnhild) Haga to the finish.”

Cendrine Browne, of Saint-Jérôme, Que., also leapt up the standings to round out the trio of Canadian women. Browne made up 14 spots, crossing the line in 35th in a time of 1:33:17.3.

The fight for the women’s podium came down to the exhausting climb up the last hill where Norway’s Heidi Weng and Sweden’s Ebba Andersson separated themselves from the pack. When the dust finally settled at the finish line it was Weng capturing her first World Cup victory in three years with a time of 1:28:11.6. Andersson finished 4.5 seconds back at 1:28:16.1. Russia’s Yulia Stupak won the battle for the bronze medal with a time of 1:28:45.3.

Meanwhile, Antoine Cyr capped off his rookie season on the World Cup by skiing into the top-30 for the second-straight day in the men’s 50-kilometre skate-ski pursuit from Maloja to S-chanf.

Starting in 21st position, the 22-year-old Gatineau, Que. skier battled through the blowing conditions to hang on for 29th spot with a time of 2:12:56.1.

Steadily progressing throughout the packed two-months of racing where he was regularly mixing it up with the elite group of 30, Cyr will take loads of experience with him into the Olympic season.

“There are so many little things I’ve had to learn this year. Just watching the Norwegians and following their lines was huge. I skied behind some of the best guys in the world and that is the best schooling you can have,” said Cyr.