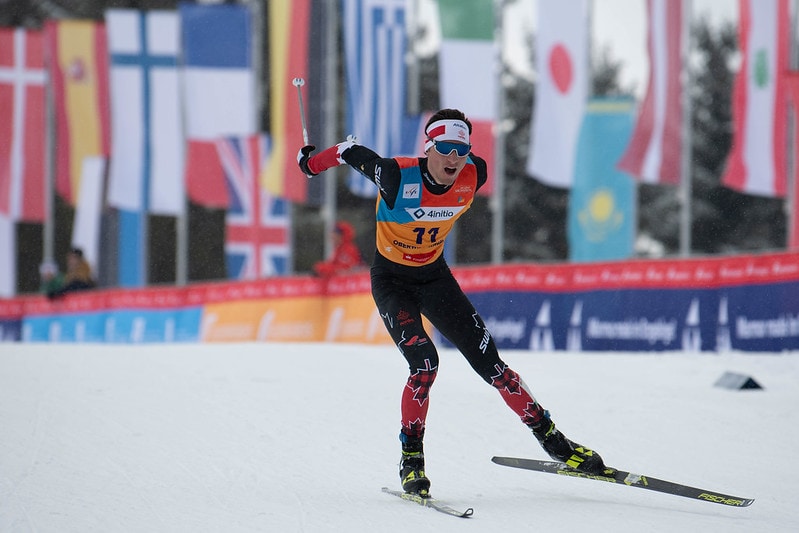 OBERWIESENTHAL, Ger.—Canada’s Remi Drolet was just 10 seconds off the pace from becoming just the third Canadian ever to win a medal at the Nordic Junior World Ski Championships after he finished fourth in the men’s 30-kilometre skate-ski race on Wednesday in Oberwiesenthal, Germany.

“I’m really excited. A result like this is what I was hoping for going into the Championships, but coming in I had some sickness, and my first races weren’t great so I wasn’t too optimistic,” said Drolet. “I just figured I’d go out here today and give it everything I had. It was a great day that I have been waiting for.”

Competing in his third World Junior Championships, the 19-year-old Drolet was matching strides with the leaders in the mass start race while battling his way around the five-kilometre loop six times to finish with a time of 1:14:22.2.

“The game plan was to stay at the front, but at the same time, not do too much leading or waste too much energy,” said Drolet. I wanted to ski relaxed, cheat a bit on the downhills and make my moves there rather than blasting too hard on the uphills.”

The Rossland, B.C. student-athlete, who is in his first year of his post-secondary education at Harvard University, exercised his race tactics to near perfection. Skiing comfortably in the pack until just under 10 kilometres to go when things started to break up.

Germany’s Friedrich Moch broke off the front on the steepest hill on the course, leaving a chase back to assemble behind him.

“That was quite a long climb and I was really tired already and didn’t have the energy to follow him, so he got away,” said Drolet. “I got in that chase pack and we finished the second last lap together. In the last lap that chase group broke apart and I just went as hard as I could.”

When the dust finally settled at the finish line, the Canadian teenager finished just shy of the podium in fourth spot.

Drolet is part of a new generation of Canadian skiers ready to carry the torch and follow the path to the podium blazed by their heroes.

“It means a lot to be (mentioned alongside the names of Alex Harvey at this stage of his career), and it is encouraging to see I’m at level that I could potentially one day be successful on the World Cup and the international stage. That is a lot of motivation for me to continue training in hopes that one day I will be able to race with the big boys,” said Drolet.

And the results over the past week demonstrate a promising future for these young Canucks.

“Remi and Tom’s results today, along with Xavier’s earlier this week, are amazing and super promising for the future of our program,” said Erik Braten, head coach, National Ski Team. “Remi does not have it easy day-to-day balancing school while trying to maximize his training, which makes this result even more impressive.

“He skied the race super smart and I could not be happier for him. Tom still has two years to go as a junior which also shows how strong that race was for him.”

The Canadian women have also had a handful of top-25 finishes in the Junior and Under-23 Worlds.

The Under-23 Nordic World Ski Championships hit the start line on Thursday with the 15- and 30-kilometre skate-ski race.