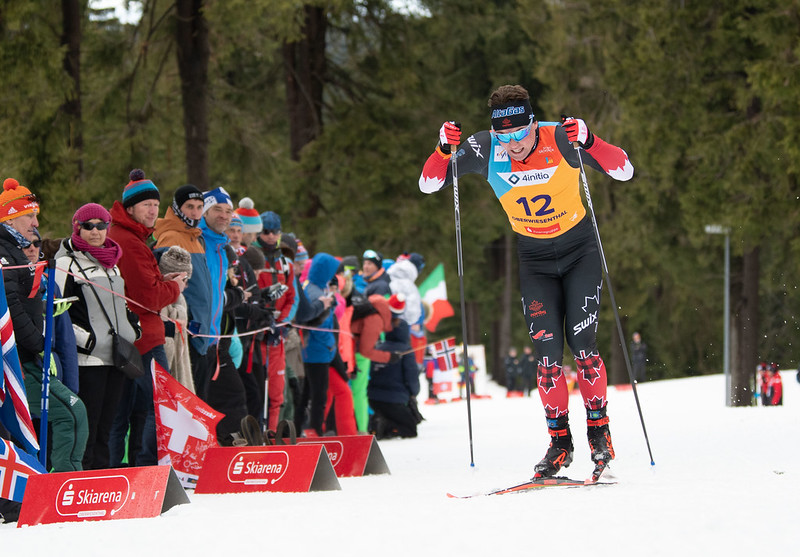 Ulricehamn, Swe.—Two of Canada’s cross-country skiers took a stride forward in their continued development while charging into the top-20 for the first time in their careers in a World Cup skate-ski sprint race in Ulricehamn, Sweden.

Graham Ritchie, of Parry Sound, Ont., stormed into 17th place in the men’s sprint, while Maya MacIsaac-Jones also posted a best-ever result with an 18th-place finish in women’s action.

Competing in just his second World Cup race of the season, the 22-year-old Ritchie earned his first-ever trip into the head-to-head heats with the fastest-30 athletes after clocking the ninth-fastest qualifying time on the 1.5-kilometre course.

“I’m definitely proud of that qualifier. Not only was it a personal best but it was great to have that Canadian flag in the top-10 on the results sheet,” said Ritchie.

“I’m pretty excited with the performance today. My skis were incredibly fast thanks to the wax techs. It was so much fun to race my first World Cup heats.”

A former hockey player growing up in northern Ontario who didn’t focus on cross-country skiing until Grade 12, Ritchie held his own in the round of 30 heats that matches up six athletes at a time. The top-two athletes in each heat move on to the next round.

His day came to an end after a hard-fought battle up and down the hills of the technical Swedish course where he crossed the finish line in fourth in his heat.

“I found myself close to the back quickly in the heat. I tried to pass people the entire way, but it just wasn’t working out,” added Ritchie. “I was able to get a good kick at the end and move up a couple of sports in the finishing stretch.”

An all-around gifted athlete, the young Ritchie will look to build on the breakthrough performance as he heads off to Finland for the 2021 Under-23 World Ski Championships in Finland next week.

“Today was for sure a step in the right direction and what I needed to gear up for U23s. It is a great confidence booster and I’m excited to see what Team Canada can get done at the Championships,” added Ritchie.

None of the other three Canadian men qualified for the heats. Russell Kennedy (Canmore, Alta.) was 44th; Pierre Grall-Johnson (Ottawa) placed 51st; and Antoine Cyr (Gatineau, Que.) was 60th.

Canada’s Maya MacIsaac-Jones bettered her career-best result by six spots in the women’s race with an 18th-place finish.

The 25-year-old from Athabasca, Alta. lined up in the World Cup heats for the third time in her young career after chalking up the 24th-fastest qualifying time.

“It felt great to be in the mix and fighting to win,” said MacIsaac-Jones, who admittedly made a tactical error in how she skied the final 200-metres of the race and was not able to advance beyond the quarter-final round after crossing the finish line in fourth spot.

“This was a very tactical course with few opportunities to make big moves but there were some small spots here and there to gain space. I stayed relaxed and worked to establish good position without wasting too much energy off the start, so I was able to keep some good power in the tank for the descent.”

Another of Canada’s promising skiers developing on the road to the 2022 Olympics and beyond, MacIsaac-Jones also mixed it up with the world’s best in the heats one year ago in Falun, Sweden and as a 20-year-old in 2016 at a World Cup stop in Gatineau, Que. Her strong finish on Saturday builds on the energy created by the Canadian women who continue to produce career-best performances each week since rejoining the World Cup circuit in January.

“The momentum on our women’s team just keeps building,” said MacIsaac-Jones. “We’ve worked hard to support each other these past few years, and I think the increased level (in our performances) we are consistently showing on the world stage reflects that. We’re setting ambitious goals for ourselves, and to be in this environment where we all have this same drive is very motivating.”

The Canadian women will continue to hunt down the biggest names in the sport who sprinted to the top of the podium on Saturday. Sweden’s Maja Dahlqvist sprinted into the winner’s circle in Ulricehamn. Her teammate, Johanna Hagstroem finished in the silver-medal position, while American Jessie Diggins bolted to the bronze.

The Canucks will be back on the start line Sunday in Sweden for the team sprints. Maya MacIsaac-Jones will join forces with Cendrine Browne while Katherine Stewart-Jones and Dahria Beatty will hit the line together in the women’s race. Russell Kennedy and Phillipe Boucher will carry the Canadian colours into the men’s competition.