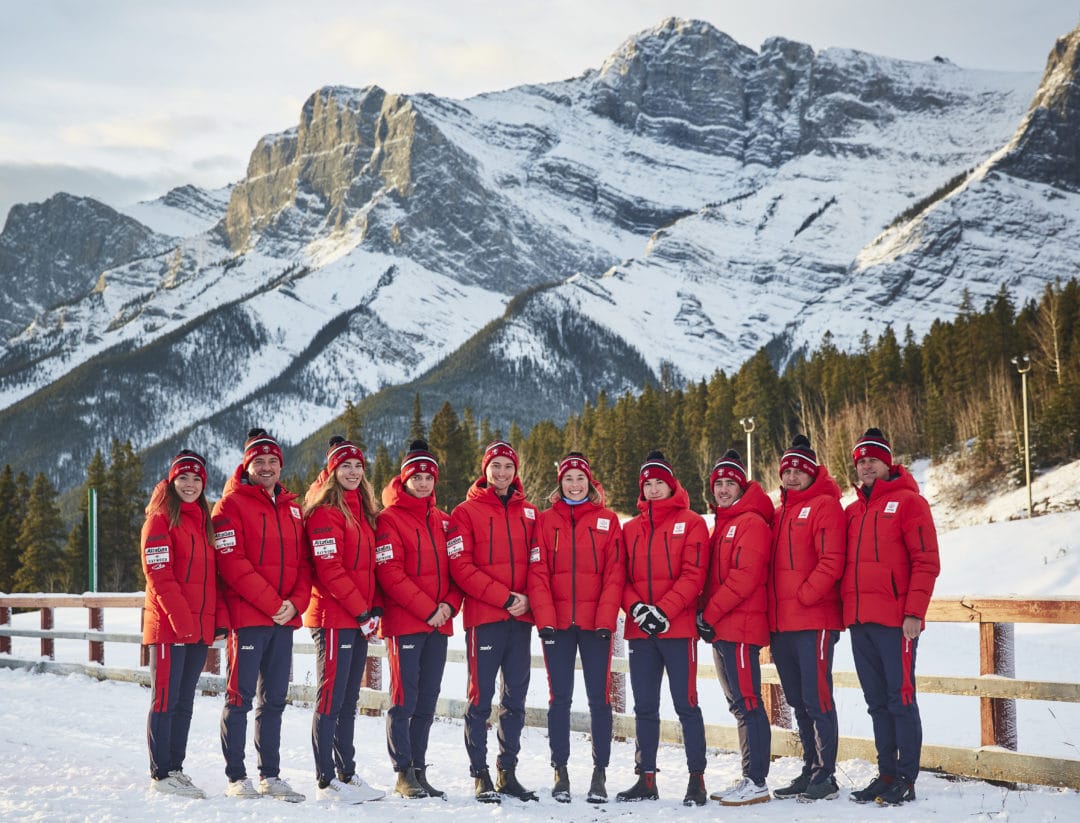 Ideal, as an opening salvo, for what lies ahead.

“Not much sunlight here, in northern Finland, only four or five hours a day, but there’s lots of light in the afternoons to train,’’ says Antoine Cyr from Kuusamo, Lapland.

“The course is in great shape. We can’t complain about the conditions, for sure.

“This village is … amazing. You kind of feel like you’re in Santa Claus’ world a bit.”

As if preparing to begin unwrapping the singular gift of an Olympic experience.

Buoyed by a slew of top-30 performances at major events last season – including a seventh-place gem by Cyr and Graham Ritchie at the skate-ski team sprint at the Oberstdorf, Germany-hosted 2021 FIS World Ski Championships – the Canadian Cross-Country Ski Team embarks on a challenging season.

“It’s a long summer. We’re at the point of ‘OK, let’s get going. I don’t want to be waiting around anymore’,’’ acknowledges seven-year national teamer Katherine Stewart-Jones. “You’re anxious. But at the same time these final few lead-in days are important in order to look at the courses and develop a confident feeling, test some skis.

“Last season was a really good one for our team. A lot of personal bests, a lot of World Cup points we hadn’t gotten before.

“We’re looking to build on that.”

The growing degree of determination embodies the esprit de corps of the Canadian contingent.

“We train so many hours in the summer on roller skis, dedicate our whole life to the sport. So, it’s an honour to see good friends, good teammates, see all the tech people and the staff, again,’’ says Cyr. “We spend so much time on the road together that we’re kind of like a family.

“Everyone’s happy to be here and ready to kick off the season.

“It’s been a couple of weird years since Alex (Harvey) retired. We’ve been on a rebuild and working really hard towards having great results on the highest-level of racing in the world. The more opportunity our skiers get in the future the better the team will become.

“I think we have some really exciting years ahead of us.” 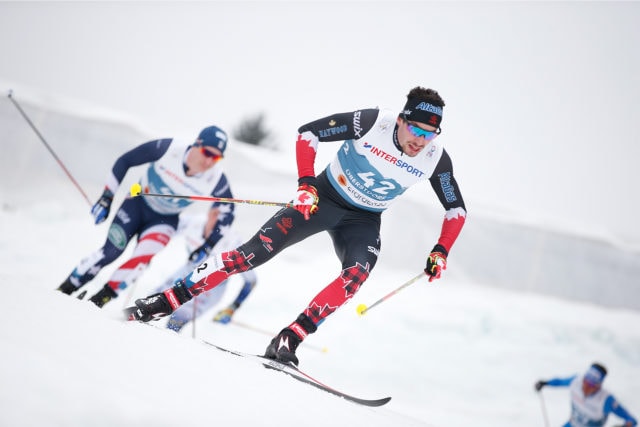 Stewart-Jones and Cyr have been joined in Europe by Dahria Beatty, Cendrine Browne, Maya MacIsaac-Jones, Russell Kennedy, Graham Ritchie and, joining the senior ranks after winning a bronze medal at last year’s World Junior Championships, one year after combining with Xavier McKeever, Tom Stephen and Remi Drolet to win an historic relay silver medal at the 2020 World Juniors, Olivier Léveillé.

“This is a good way to start the season, together, as a team,’’ says Joel Jaques, Nordiq Canada’s High-Performance Manager, “In order to build on people’s successes. And if people aren’t performing at the level they want, they have the entire team behind them to bring them up to the next level.

“Even though we had good results last year at World Cups, World Championships and World Juniors, I think some of our athletes missed that start-up piece, that pump-up piece, so this’ll be exciting.

‘We also had some juniors, our Next-Gen athletes, do a little tour of Finland and Sweden and that helps get them started, get them off on the right foot. It’s an Olympic year, a big year and you want to have that motivation, that drive, knowing you’re prepared going into events later in the season.

“There are some new rules and regulations coming in around waxing, so it’s good to be here, kind of navigating that.

“We have five of the eight athletes here competing and the other three are preparing for events next weekend in Lillehammer.

“I think this is perfect.”

Following Ruka, the World Cup trail shifts to Lillehammer, Norway, then Davos, Switzerland and Dresden, Germany prior to the Christmas break.

On the horizon, of course, are the Beijing Winter Olympics, beginning February 5th at the Ski Jumping and Cross-Country skiing facilities in Zhangjiakou, 200 km northwest of the Chinese capital.

The Canadian Olympic Cross-Country Ski Team – provisionally allocated four women’s and three men’s spots on the basis of international rankings – will be selected following trials from January 6-11 at the Canmore Nordic Centre.

Being as ready as possible is a carrot that only intensifies the importance of the next few upcoming World Cup stops.

“The race for the spots is going to be hard,’’ concedes Cyr. “Frickin’ hard. But that’s why we love skiing.

“Of course, I dream about the Olympics, think about them a lot. They are so big. But at the end of the day the race we’re going to do this weekend is going to be just as hard as any in the Olympics. 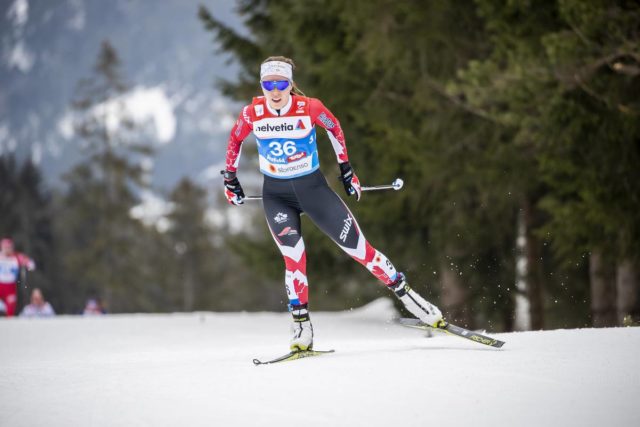 “In terms of racing, every World Cup weekend is crazy. For me, it’s like a circus. All the big wax trucks, all the testing, all the staff around us.

“For sure, though, it’s good to picture yourself going to the Olympics.

As well as excelling there.

“Personally, my top, top goal for this season would be a top-10 in Beijing,’’ notes Stewart-Jones. “At the World Cups, I’m looking to be in the top-20s pretty regularly.

“Last Olympics I didn’t make (the team). I was disappointed but I also knew in the back of mind that I wouldn’t have done that well there, then. It would’ve been more of a participation thing, so I told myself that at the next ones I wanted to be competitive.

“I‘ve always not wanted to just participate at the Olympics. I want to perform there.”

That mindset embodies a Canadian contingent ever growing in confidence.

“These are high-performance athletes,’’ says Jaques. “That’s one of the hardest jobs out there because after every race you’re evaluated, and every day you have to embrace that performance-on-demand piece. It’s good to develop that early, now, so that closer to the Games you’ve had that practice and it’s coming a bit more naturally, I guess.

“Last season we had two weekends of World Cups, and then there we were, at World Championships. For World Juniors they had no racing at all. Just straight into the Championships. So not much preparation time.

“All of the athletes here have four weekends to fine-tune their skills heading into the Games, so it’s crucial to seize the high-level of competition you have at World Cup events; keep that pressure on while knowing you have a month or two to get it fine-tuned, to get it as right as possible.

“This is another important season for us, on a number of fronts. I’m excited to see what’s going to happen.”