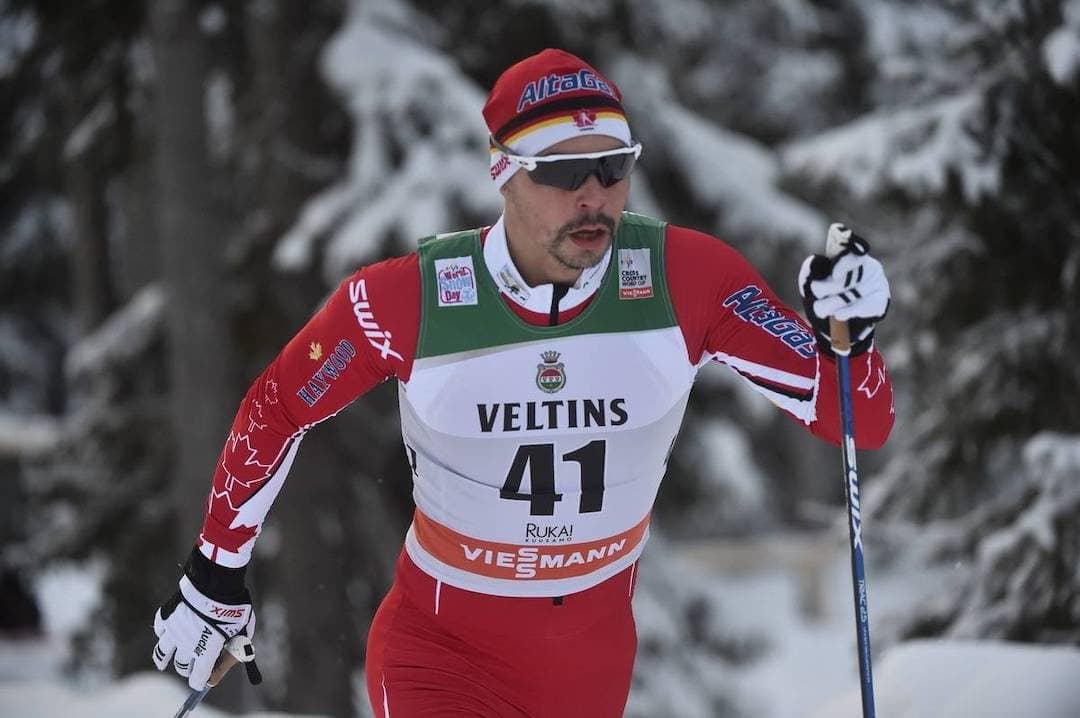 The blast of noise emanating from the computer room at Lawrence Grassi Middle School in Canmore back on Feb. 15, 2002 could be heard as far away as Main Street.

“I remember being 13,’’ Jesse Cockney is reminiscing, “and we – a few buddies of mine, Haakon Lenes and Evan Bruce, fellow skiers, some others, can’t remember who exactly, and I – were sitting at the computer, looking up the Olympic race results from Salt Lake City.

“And we saw that Beckie Scott had finished third (in the 5 km pursuit). Third! I mean, that was …. crazy. She’d eventually get the gold when those two Russians were disqualified, of course. But at the time she was third. Which was still, to us, just amazing.

“I’d been skiing my whole life. But that’s when I decided: I want to make it. That was a big day for me.”

Sunday happens to be National Indigenous Day across Canada. Another big day for Jesse Cockney, now a two-time Olympian.

“I really value that there are these moments where different communities get a chance to showcase their vibrancy. In Canada you’d be pretty hard-pressed to find a more vibrant community than indigenous communities.

“East-west, north-south. Everything under the sun. There’s so much variety.”

Sport in general, and cross-country skiing in particular, is a part of the family culture, too.

His sister, Marika, competed for a time. His dad, Angus, an Inuvialuk hailing from Tuktoyaktuk, collected two gold medals at the 1975 Lethbridge-hosted Canada Winter Games.

Going back further, great grandfather Bob Cockney was one of the first Inuvvialut to learn to read and write and would use those tools to go pen an autobiography, I, Nuligak. He was also, by all accounts, a gifted athlete.

“So, I guess,’’ reckons Jesse, “you could say it’s in the blood. My competitive spirit was instilled in me at a young age by my dad.

“We have pictures of me on skis when I was two years old. Early, early.

“At that age, it’s not really skiing. But I remember being part of racing in Yellowknife, before we moved to Canmore in 1996, when I was, oh, seven.

“Then dad showed my sister and I how to train, how to approach a sport that he loved, too.

An Olympian in both 2014 and 2018, at Sochi and PyeongChang, Cockney had caught the sports bug as a kid, and had that first stoked back in 1996, watching the 100-metre dash final at the Atlanta Summer Olympic Games.

“Donovan Bailey’s win,’’ he says, “was big for me, seeing the size of the stage at the Olympics. To be the fastest man in the world, setting world records, winning gold medals? And the way he won … As a seven-year-old, watching someone for your country run that fast, you’re in shock.

“But a good kind of shock.”

Being a practitioner of what he preaches, Cockney has made it a point to be a positive role model for all aboriginal youth, and away from the snow, mentors First Nations, Inuit and Metis students. (His inspiration, Scott, who was herself inspired by sisters Sharon and Shirley Firth – two of the first Aboriginal athletes to represent Canada at an Olympic Games – has gone on to create Spirit North a charitable program that empowers Indigenous youth through sport and play by introducing them to cross-country skiing.

“Being an athlete myself, I could never put myself on the same level as Donovan Bailey or Beckie Scott,’’ he protests. “They’re champions.

“By comparison, was an also-ran at the Olympics. But I had a helluva time being an also-ran. Bringing the energy to being my best, trying my damnedest to get there, that commitment, sticking to it, I hope that shines through to people.

“I have a lot of races that I remember. But at the end of the day, it’s the work that I’m most proud of and the people I got to share it all with, my teammates, my buddies.

“Usually whenever I have any discussion, whether with a school group or on a reserve or with a youth organization, I speak to the journey, not any end result.

“The moment of being on a podium is short, so fleeing. But the experiences you draw in trying to get there, they last. It seems to take forever; seems like you’re always busting your hump.

“That’s the message I try to share – know yourself, find something you love – skiing, sports, whatever it might be – and don’t be afraid to work hard at it. That’s where the satisfaction comes from.”

Following the PyeongChang Games, having felt the desire to train single-mindedly wane, Cockney took a year away from sport. He has now completed two years towards a political science degree, and this fall will begin studying kinesiology at the University of Calgary.

“I felt two years ago it was a good time for me to step away from the sport. But I always had mixed feelings and maybe I wasn’t super honest with myself.

“In the last year I started training pretty seriously again, tiptoeing back into it, setting my sights at the same level as when I was at on the National Ski Team.

“It’s been productive and feels meaningful again. That was missing in 2018. It feels exciting to have that energy back. I’ve got concrete goals in mind, but they aren’t really focused on an Olympics.

“I just more want to have some great performances. I have some dates circled on the calendar for next season and I hope those happen, with everything up in the air right now.

“We’ll see where tomorrow takes me.”

This Sunday, and every June 21, takes him back to his upbringing, to his dad, to his great grandfather, to his heritage.

“For a day like National Indigenous Peoples Day, it couldn’t not bring back thoughts to our ancestry and the challenges they faced in their lives,’’ emphasizes Jesse Cockney.

“Just the type of culture that was able to emerge from such hardship.

“I’m a winter athlete. So, I know cold. But I can go out for as long as I want and then come back inside. That was not the case for centuries, people up north, living and thriving in those conditions.

“So, this is one of those days that, I, my sister, my dad, and everyone can reflect on the strength they showed, and be proud of the vibrancy that’s still within the Indigenous communities.

“My whole athletic career, and now that I’m a university student, has been supported by people up north.

“It’s wild how much this community has given me. I feel pretty lucky.”