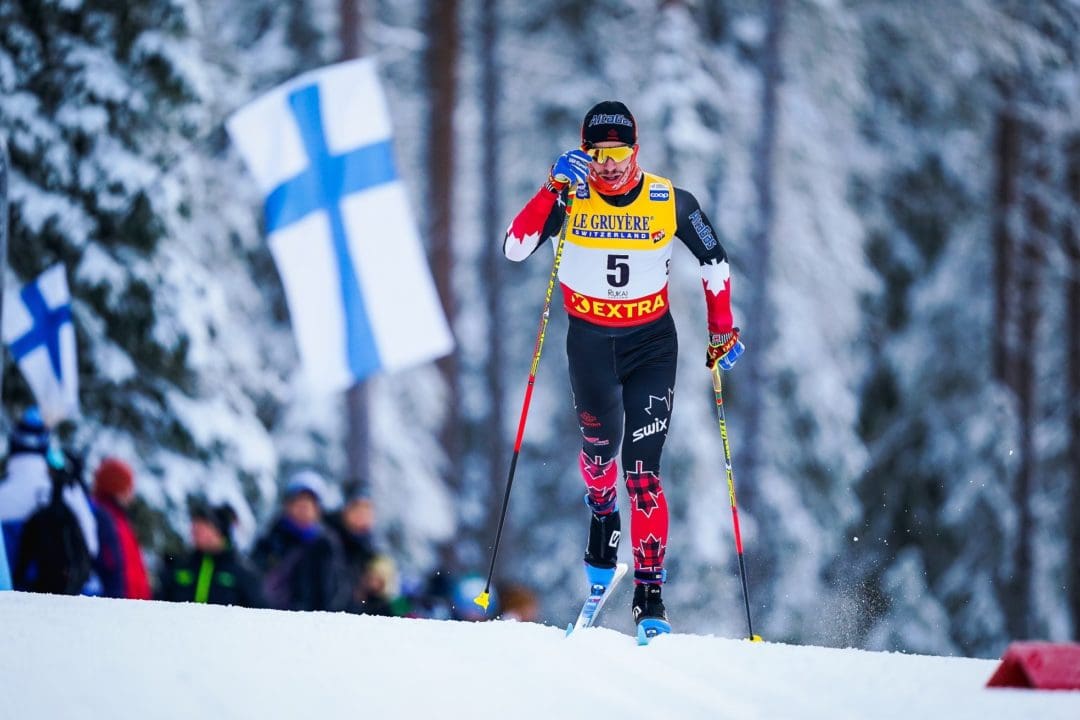 RUKA, Fin.—Antoine Cyr mixed it up with the big boys in the sport of cross-country skiing while shattering his career-best distance result on the World Cup with an 11th-place finish in Ruka, Finland on Saturday.

Competing in just his fifth World Cup race week, the 23-year-old finished just 34 seconds off the podium pace after powering his way around the 15-kilometre individual start classic-ski test in a time of 34:00.9.

“This is huge. As an athlete you always want to reach the best potential you know you are capable of and today, I felt I was near my best and almost in the top-10 on the World Cup which is insane,” said Cyr. “It was so fun racing out there and I’m excited to know I can be there. It hurt but it felt good.”

Taking advantage of lightning-quick boards, thanks to the strong collaboration of the athletes working closely with the dedicated team of Canadian wax technicians on ski selection for the hard-packed snow conditions, Cyr followed his strategy to perfection while striding up the long gradual climbs and transitioning to double poling.

“It was a good, hard classic course that suited me,” said Cyr. “There is so much that goes into a good performance and having a great race – preparation, the skis, and the shape are all important. It all came together today.

“I skied by myself for most of the race. I didn’t have a ride from anyone. It was just pure racing – man versus man out there – and I am super proud of that result.”

Cyr, who is competing in just his second season on the World Cup, continued to build on a breakthrough rookie season last year where he regularly placed in the top-30 on the elite cross-country ski circuit. His previous best finish was placing 21st in a 15-kilometre classic-ski mass start race in Switzerland last year.

The Gatineau, Que. product also teamed up with Graham Ritchie at the 2021 World Championships where the Canadian duo put down an impressive seventh-place finish in the team sprint event.

“This is for sure a big boost for my confidence but also for the whole team. We train all year around together, so for the rest of these guys to see that I can do it lets them know they can too. It was a really good day for all of Canada,” said Cyr.

Cyr is amongst a group of promising young cross-country skiers in Canada who are now ready to test themselves against the cream of the crop in the sport.

That potential was on full display on a cold day in Finland where two other Canadian men also took a stride forward in making their Olympic dreams a reality this winter. Russell Kennedy – the only Olympian on the men’s team who also guided for Brian McKeever at the 2018 Paralympics – posted a new personal best individual result, finishing in 27th place on Saturday. The Canmore, Alta. resident, who rattled off a string of top-30 finishes last season for the first time in his career, skied to a time of 34:43.4.

Olivier Léveillé, of Sherbrooke, Que., grabbed the final spot in top-30 in just his second World Cup start. The 20-year-old, who became just the third Canadian ever to win an individual medal at the Nordic World Junior Ski Championships last year when he celebrated a bronze-medal triumph, was the fourth-fastest skier under the age of 23 in Finland with a time of 34:49.9.

“That was a great day a really strong start to the season for our team,” said Joel Jaques, high-performance manager, Nordiq Canada. “Antoine was very strong all day, showing he can compete with some of the very best in this sport, Russell picked up where he left off last year, and for Olivier to be in the points in his first World Cup distance race as a senior is showing great signs for a promising future.”

Another Canadian who has been steadily climbing up the international rankings over the last two years is Katherine Stewart-Jones. The 26-year-old from Chelsea, Que., finished in 35th spot in the women’s individual start classic-ski race. Stewart-Jones completed the two hard-packed loops in a time of 26:23.4.

Cendrine Browne (Saint-Jérôme, Que.) was the only other Canadian woman to hit the start line, and finished 49th at 27:10.0.

Sweden’s Frida Karlsson won the women’s race with a time of 24:29.4. Norway’s Therese Johaug claimed the silver medal at 24:43.1, while Germany’s Katharina Hennig locked up the bronze medal with a time of 24:44.6.

The World Cup wraps up in Ruka, Finland on Sunday with a 10- and 15-kilometre skate-ski pursuit race.