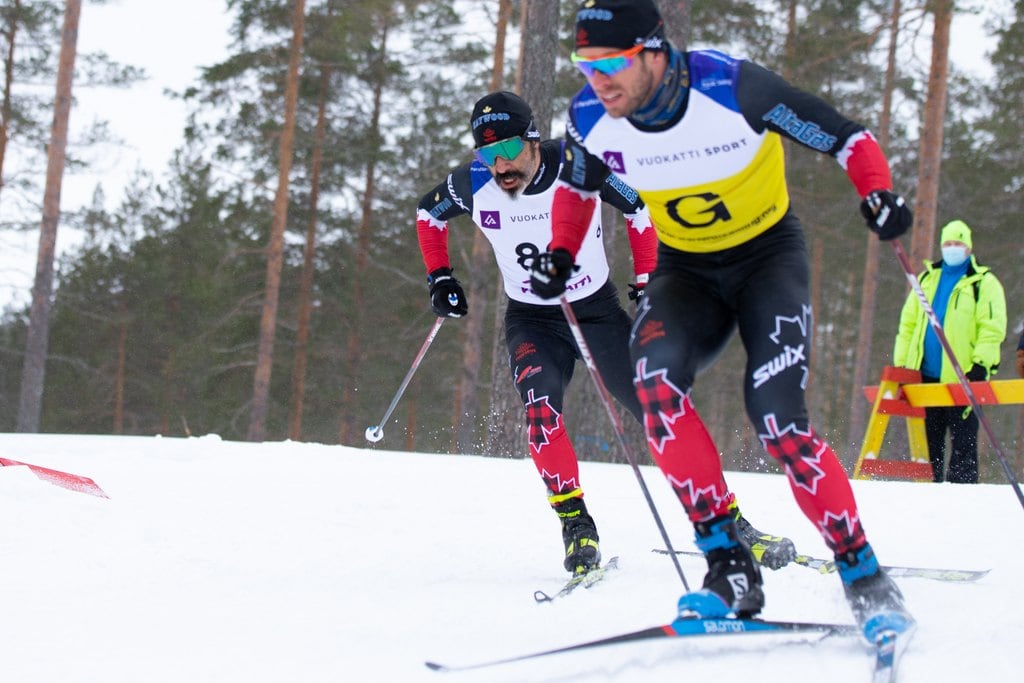 VUOKATTI, Fin.–It may not have been the colour of medal they were hunting down, but Brian McKeever and Russell Kennedy will take a lot of positives out of a bronze-medal performance in the men’s 20-kilometre skate-ski race at the Para Nordic World Cup in Vuokatti, Finland on Monday.

“We played strategies. We played with the pacing and we played with techniques, but it was a hard day,” said McKeever. “We went hard, but just didn’t have any speed and things just felt heavy.”

The two Canmore-based friends charged to a third-place time of 46:02.0.

“There are a lot of positives coming out of today,” added McKeever. “At 41 years old, the fact we are competitive, and in the game, when I’m not feeling amazing is a positive thing. I know there is a lot left in the body yet. We just need to find it. A real prep and we will be back.”

“That is what this season is about. Everybody has been disrupted in some way and has come out of this training year differently. It is important to be here just to see where things stand heading into the Paralympic year. Not only our shape, but where everybody is at.”

With the 30-year-old Russell Kennedy setting the pace, the two Canucks pushed the effort in their first two of five laps around the four-kilometre loop. After slowing things down in their third rip around the Finnish course, the Canadian duo tried to charge back to the top of the standings in the final eight-kilometres but didn’t have the snap needed.

Russia’s Stanislav Chokhlaev and his guide Oleg Kolodiichuk set the time to beat at 45:47.4. Guided by Uladzimir, Belarussian Yury Holub finished six seconds off the pace in second at 45:53.9.

“For sure I want to win every time, but I also know this (getting beat) is really good for Para sport. To see a kid like Yury progress the way he has is awesome to watch,” added McKeever, who has dominated the Para Nordic sport world since the turn of the century. “You can tell Yury’s head is now in the right place. It is so good to see how far so many of these athletes have come, and the progression of the sport as a whole.

“Providing I have had a good race, I have always said I love it when the young guys beat me – even in Canada. It is important for the growth of our program and sport,” added McKeever, who will be prepping for his sixth Paralympics in Beijing 2022. “We are racing okay right now. It’s just not quite at the right level, but right now we are all just feeling each other out, and that is fine. That is what this year’s all about.”

Meanwhile, in the women’s 15-kilometre skate-ski race, it was Brittany Hudak finishing just off the podium. Hudak, of Prince Albert, Sask. followed up a bronze-medal finish in Friday’s season-opener with a fifth-place time at 45:25.4. Lyne-Marie Bilodeau (Sherbrooke, Que.) skied to seventh in the women’s sit-ski race with a time of 1:06:51.0.