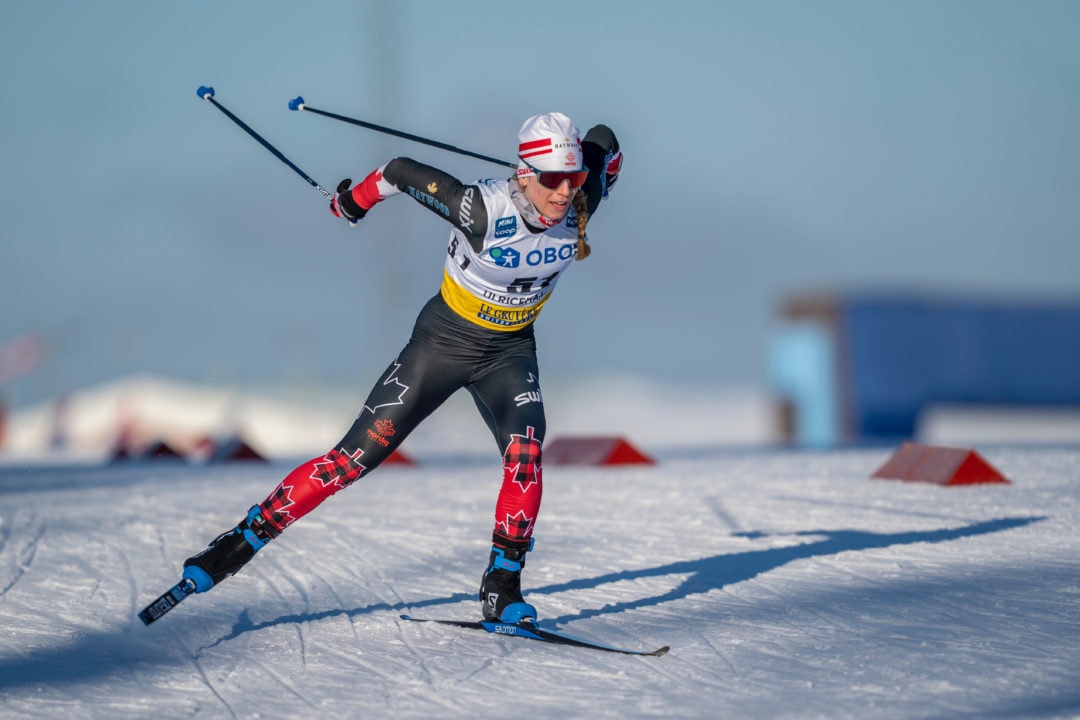 OBERSTDORF, Ger.—Cendrine Browne knows she has taken a significant step forward in her continued development into a world-class skier during this COVID-shortened cross-country ski season.

Following another top-30 finish in the women’s 10-kilometre individual start skate-ski race at the World Nordic Ski Championships on Tuesday, the 27-year-old from Saint-Jérôme, Que. also knows she’s mere seconds away from another giant stride up the results page.

“I am happy with today’s race. I was aiming for top-20 and was so close – just 12 seconds off,” said Browne, who for the first time in her career is regularly placing in the elite group of 30 each time she hits the start line at the top level.

“I just died on the second lap so I know that in a better day top-20 is definitely something I can achieve.”

The 2018 Olympian darted out of the start, skiing a top-15 pace for a big chunk of her first of two rips up and down the rolling terrain of the challenging five-kilometre loop in Oberstdorf, Germany while battling through the warm and varied conditions.

“It was tricky today, but the organizers did a good job in preserving the track,” said Browne. “It was pretty soft in some places, but since I was bib 3, I was lucky enough because the conditions didn’t deteriorate that much for me.”

Losing steam while powering through her final lap, Browne dug deep to clock a time of 25:42.3, grabbing her third-career top-30 finish at the World Championships, and second of the week.

“I love the individual starts because you have to be very strong mentally, and I definitely think that’s one of my strengths,” she said after skiing into the prestigious group of 30 for the seventh time of her career while enjoying one of the best all-around performances by a Canadian woman at World Championships since Sara Renner’s bronze-medal triumph in Oberstdorf in 2009.

“Overall, I couldn’t ask for a better season. Being this consistent in every race is a dream come true, and I’m proud of how I’m performing even though I had a concussion in September and contacted COVID in November.”

Fighting to earn her spot back on the National Team and have the opportunity to train hard alongside the other Canadian women with the goal of starting to break her way into the top-15 in the Olympic year, Browne is hungry to chase down the Norwegians, Swedes and Americans who own the women’s cross-country ski podium.

Norway’s Therese Johaug was dominant on Tuesday, capturing the women’s 10-kilometre skate-ski crown with a time of 23:09.8. Two Swedish athletes skied to the final two steps of the podium. Frida Karlsson was 54.2 seconds back of Johaug in the silver medal position with a time of 24:04.0. Ebba Andersson was just over a minute off the leading pace, clocking-in at 24:16.7 for third spot.

The World Nordic Ski Championships continue on Wednesday in Oberstdorf when the men hit the start line for a 15-kilometre individual skate-ski race.