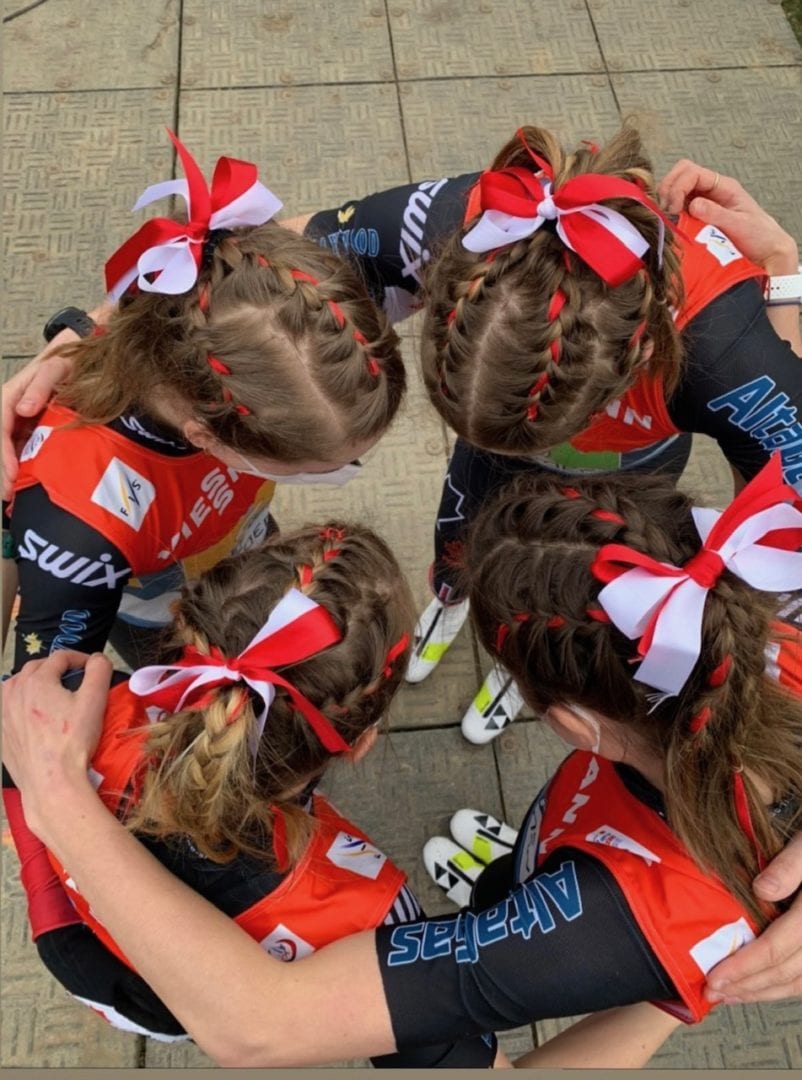 CANMORE, Alta.—Canada’s cross-country ski athletes are charging into the highly-anticipated Paralympic and Olympic year replete with a mix of veteran leadership and podium potential along with youthful energy and drive.

Nordiq Canada officially kicked off the critical 2022 season by naming a determined line up of 26 athletes who will lead the Canadian charge to qualify for Beijing while donning the maple leaf at international competitions next winter.

“We have assembled a unique group of athletes led by a talented group of medal performers on the Para-Nordic stage, along with an inspired group of senior and next generation athletes in our Olympic pathway who are all continuing to climb up the international standings and are determined to see the Canadian flag raised about the international podium,” said Kate Boyd, high-performance director, Nordiq Canada.

A high-powered group of nine Paralympians, including two guides, will once again be counted on to lead Canada’s medal-winning charge over the next year.

Graham Nishikawa (Whitehorse, YK) and Russell Kennedy (Canmore, Alta.) will both continue to share guiding duties for Brian McKeever. Kennedy, who competed at the 2018 Olympics before also helping to guide Brian McKeever to a golden hat trick at the Paralympic Games in PyeongChang will also look to build on a breakthrough season of his own on the World Cup circuit where he posted a handful of top-30 finishes during a COVID-condensed season this year.

“Eight athletes within our Para program have stood on the Paralympic podium. This team is fiercely determined to continue its tradition of excellence, and have their eyes focused squarely on podium performances every time they put on a race bib,” added Boyd. “More importantly, with a group of proven-performers continuing to lead the way, we have increased our attention on developing the next generation of athletes within this program to ensure our trail to the Paralympic podium continues well beyond 2022.”

Nordiq Canada also named 12 young cross-country ski athletes from across the country to its National Ski Team program. The senior squad will be composed of four women and five men, while one woman and two men will make up the junior program. One female under-23 and one female junior National Ski Team positions currently remain open and will be filled from targeted domestic race results from events in November 2021 and in January 2022.

Dahria Beatty (Whitehorse, YK) an Olympian veteran in the program, who will be counted on to guide the young squad on the trail towards the 2022 Games. The 27-year-old Beatty, who capped off her 2021 season with a career-best 15th place distance result in Switzerland, represented Canada at the 2018 Olympic Winter Games in PyeongChang.

Cendrine Browne (Saint-Jérôme, Que.) – a 2018 Olympian, Cendrine enjoyed a breakthrough season with three, top-30 finishes at the 2021 World Ski Championships, highlighted by a 23rd place result in the skiathlon.

Antoine Cyr (Gatineau, Que.) – after teaming up with Graham Ritchie to finish seventh in the team sprint at the senior World Ski Championships, the 22-year-old Cyr rattled off a couple of top-30 finishes on the World Cup.

Pierre Grall-Johnson (Ottawa, Ont.) – skied to an 18th-place finish at the under-23 World Ski Championships this year.

Olivier Léveillé (Sherbrooke, Que.) – will take his first strides into the senior ranks after coming off a historic bronze-medal finish at the Junior World Ski Championships. The 20-year-old was just the third Canadian ever to win an individual cross-country ski medal at the Junior World Champs where he finished third in the 10-kilometre skate race.

Maya MacIsaac-Jones (Athabasca, Alta.) – one of Canada’s top sprint racers, MacIsaac-Jones rejoins the National Ski Team thanks to an impressive 18th-place sprint finish at the World Cup in Ulricehamn, Sweden.

Katherine Stewart-Jones (Chelsea, Que.) – consistently placed in the top-30 on the World Cup stage, highlighted by a 17th place finish in a 10-kilometre mass start race in Sweden.

A trio of young Canucks will make up the junior program including: Jasmine Drolet (Rossland, B.C.), who enjoyed an 18th-place finish at the 2021 Junior World Ski Championships; Tom Stephen (Calgary, Alta.), who made his mark on the international stage with three top-12 finishes at Junior Worlds including a fifth-place result in the 30-kilometre mass start; and Xavier McKeever (Canmore, Alta.), who has been steadily developing through Canada’s national ranks.

“This is a young group of athletes, with eight of them under the age of 25, who we are focused on developing through to the 2026 Olympics and beyond,” said Boyd. “They are making steady progress in their continued development throughout our national program, regularly producing personal best results. It is our goal to work with our sport and funding partners to ensure this group of athletes have the tools they require to succeed and, ultimately, contribute to Canada’s Olympic medal count.”

Nordiq Canada is the governing body of para-nordic and cross-country skiing in Canada, which is the nation’s optimal sport and recreational activity with more than one million Canadians participating annually. Its 80,000 members include athletes, coaches, officials and skiers of all ages and abilities. With the support of its valued corporate partners – Haywood Securities Inc., AltaGas, Auclair, Swix and Lanctôt Sports– along with the Government of Canada, Canadian Olympic Committee, Canadian Paralympic Committee, Own the Podium and B2Ten, Nordiq Canada develops Olympic, Paralympic and world champions.