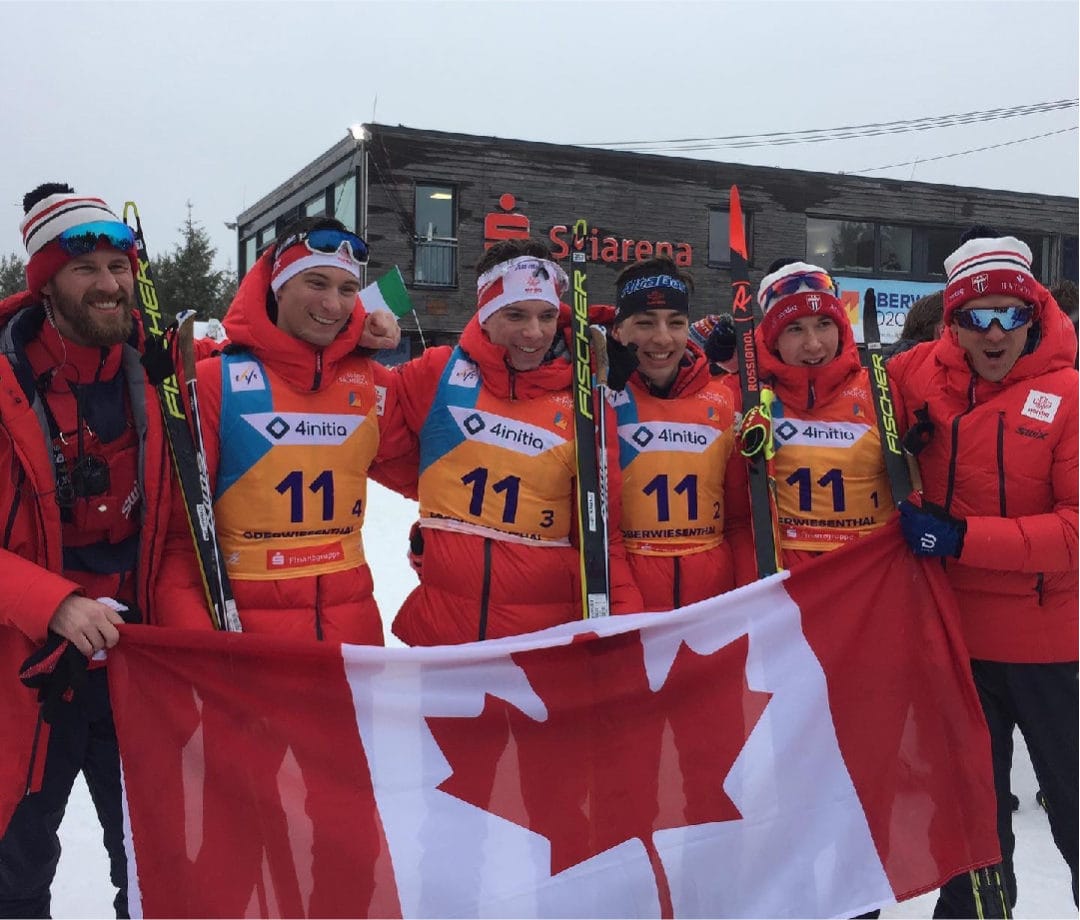 Ted Kalil has experienced first-hand just how instrumental the Nordiq Canada Development Fund (NCDF) can be.

“I remember talking to some of the athletes on site at the 2019 World Cup in Quebec City, standing by the trails,” began Kalil, a member of the Nordiq Canada Board and chair of the NCDF committee.

“I recall the Friday was a sprint and there were distance races on Saturday and Sunday and talking to some of the athletes after they had their first experience of racing a World Cup and in some cases just getting absolutely smoked by some of the best in the world. You kind of go in wondering what their attitude is going to be. I remember a few of them looking at me – the reaction was the same in every one of them – and, I’m paraphrasing, but they all said ‘I can’t wait to get back to training’.

“It was so motivating for them to see what that level really is at the top of the game. So, I thought, this is really worth doing.”

The NCDF, a permanent endowment fund, was created by the organization’s Board three years ago. The initial seed capital was funds Nordiq Canada provided, somewhere around $60,000. Thanks to donations from key donors in the past couple of years, the pot has grown to about $100,000.

“The first time we really did anything with the fund in terms of supporting athletes was a year and a bit ago,” Kalil explained. “We had intended to do the same thing this past March for the Quebec City and Canmore World Cups, which were cancelled because of Covid. But our intention was to support that.”

In the spring of 2019, athletes heading to the Nordic Junior and Under 23 World Championships were helped financially. The costs for a preparation camp held in Norway – led by none other than Canadian World Champion and four-time Olympian Devon Kershaw, were also defrayed. 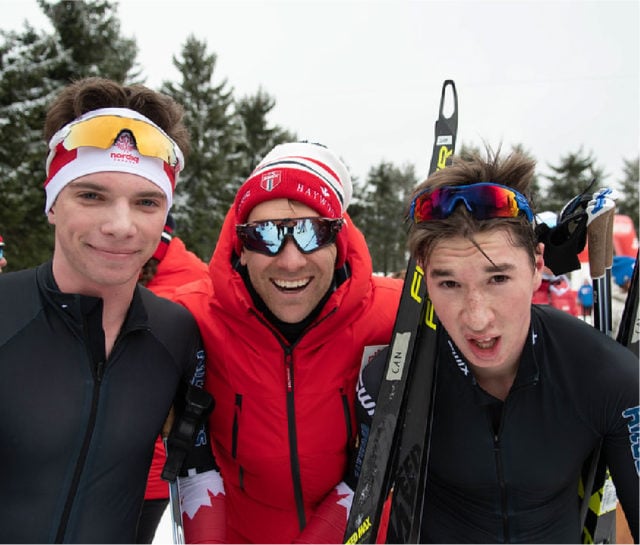 One of the beneficiaries of that experience was Anne-Marie Petitclerc, a skier out of Quebec who is heading into her final season as a junior. 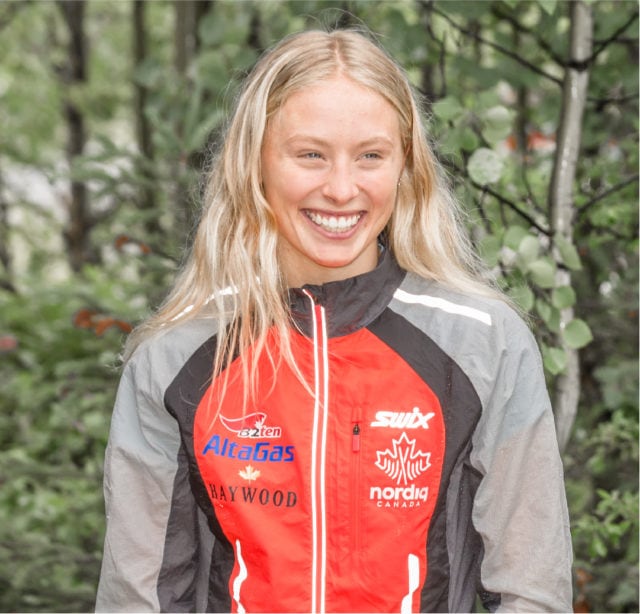 “I’m very grateful because I wouldn’t have been able to do a lot of things last summer – and probably this summer ahead, when COVID is over without the support,” she explained. “(The Norway camp) made a huge difference because you’re able to see the international level. It’s super important to be able to connect with other countries and train with them, to see other people who are motivated and how they train.

“Last summer, we did a lot of camps, and trained with the senior athletes in Canada as well. It’s good to train with faster girls. For me, I was able to train on the (Nordic) treadmill and that was a huge game-changer for my technique. It kind of punched me in the face when Iwent to juniors and saw the competition there. It’s very nice to have that punch when you’re a junior and you know you have to keep working.”

The fund’s targeted group is the NextGen, or the up-and-coming athletes who it is hoped will one day be among the sport’s international elite. Canmore’s Xavier McKeever is one of those. 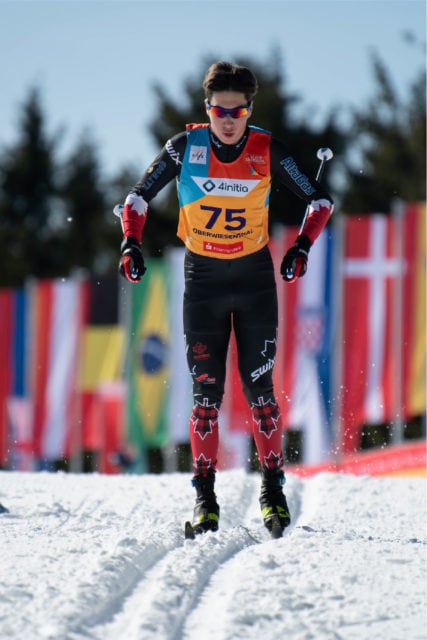 At 16, McKeever was too young to take part in the Norwaycamp, but did train there for a week under Kershaw’s watchful eye, in what he called a highlight of the summer.

“For sure it’s been helpful, getting access to programs with the team like pre-camps to prepare for World Juniors and that kind of environment to train as a group,” he noted. “Having open camps is good step, and much-needed step, for skiers to develop –having that opportunity to train with people on the National Ski Team. But, also with other things such as support programs around training, zone testing and incremental testing. Having access to strength coaches. The additional funding makes that happen so it is critical.”

The NCDF committee’s task is to oversee the endowment fund in conjunction with the finance committee. It is also charged with soliciting donations and setting the criteria as to who should be applying for the money.

In the first year, the NCDF committee did not put out an application for allocation.

“Now we’ve decided to go one step further and open it up a little bit,” Kalil explained. “Our request for proposals will go out shortly. We’ll open application to (provincial and territorial) divisions and (one of three national) training centres. We’re opening up the circle a little bit.

“What we’re looking for in terms of criteria is to see that it benefits a large number of athletes, preferably from a wide region or multiple regions. We want to focus on developing athletes to be internationally competitive. We’re not the guys to fund your ski-at-school program. We’re looking to prioritize projects that take place in Canada. That’s not what we did with the Norway training camp, but it is our initial intention.

The committee will give interested groups a month to submit a proposal, at which time it will review all applications with an objective scorecard. Successful bids will be informed possibly by the end of August.

It is hoped the fund’s legacy will grow through the support of athletes and institutions that benefit from it, mainly through promotion and acknowledgment of the funding. The end goal, of course, is to help young Canadian skiers in their quest to vie for cross-country glory by reducing their financial burden. And for that, the coaching fraternity is grateful.

“With the situation we’re in, we’re always quite far from the centre of this sport, the European epicentre,” pointed out national ski team coach Erik Braten. “My point is not to go to Europe as often as we can; it’s to create a balance between seeing what’s out there and experiencing that – like the international camp we went to – and then creating our own direction in Canada. We’re not trying to copy Norway or copy Italy; we want to know what’s out there and decide what we want to do as a team.

“It’s a delicate balance,” Braten continued. “For sure, it’s important from a young development side of things what’s going on in Canada. Obviously Canada is the key piece in the building process. But if you’re dreaming to be Olympic medallists, there will be a lot of travel, a lot more than just Canada or North America.

“Create good camps in Canada where even those outside of the National Ski Team get to be a part of it when we’re around the country. To be able to mix the most promising athletes with some who want to be at the level is a bonus. It will give everyone the opportunity to reach for that level. That’s what we’re focusing on with that funding.