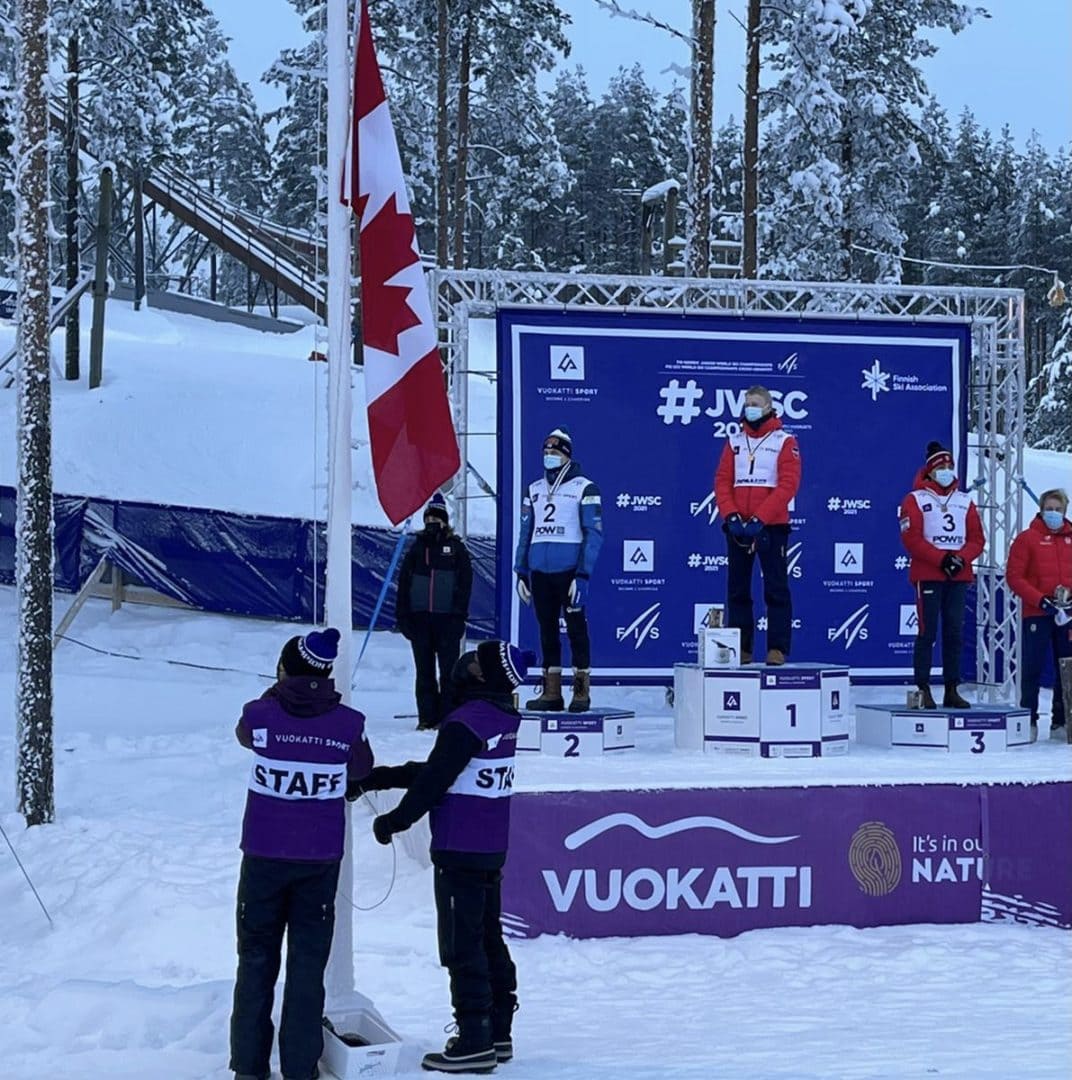 VUOKATTI, Fin.— Olivier Léveillé became just the third Canadian ever to win an individual medal at the Nordic World Junior Ski Championships while celebrating the bronze on Friday in Vuokatti, Finland.

“This is so hard to believe, but I’m pretty stoked,” laughed Léveillé, who was hoping for a top-10 finish in the race. “Maybe I dreamed of this happening, but never did I think it was a reality.”

The 19-year-old skied into the history books alongside some prestigious names after clocking an impressive third-place time of 24:53.9 in the junior men’s individual start, 10-kilometre skate-ski race on a cold day in Finland.

“It means so much to be in this company. I am only the second Canadian male to do this, and we all know who the first one was, so I’m very happy with this,” added Léveillé.

The triumph was the sixth medal ever for Team Canada at the World Juniors in cross-country skiing.

“To see where Alex went with his career after doing the same thing as me today gives me great hope for the future of my career and extra motivation to be the best,” said Léveillé. “He is a legend. I haven’t talked to him much, but I’m pretty sure I’ll have a chat with him now. When I get that chance, I’ll take all the advice he can give me for the future.”

Léveillé’s dreams almost came crashing down after he broke a pole in his second of three laps around the 3.3-kilometre loop.

“I had a really fast start today and was in the game right in the first few kilometres. Everything was going well until I broke that pole. But I broke it in a good place at the top of the climb, and just started screaming, ‘pole, pole, pole,” said Léveillé, who had a lightning-quick final 1,700-metres to the finish. “I got handed one within 10 seconds and it was nearly the perfect height for me.”

Léveillé, of Sherbrooke, Que., finished just 27.3 seconds off the golden pace set by Norway’s Martin Kirkeberg Moerk, who completed the 10-kilometre race in a time of 24:26.6. Finland’s Alexander Stahlberg skied to the silver at 24:41.5 in the 97-man field.

Léveillé had good company surrounding him while heading to the start line. With all of the Para-Nordic World Cup races cancelled this year due to COVID-19, Brian McKeever – Canada’s most accomplished winter Paralympian – was at Léveillé’s side minutes before the race to help him select his race skis.

McKeever decided to lend his time and wisdom to help Canada’s rising stars chase the podium in Finland while integrating himself as a member of the waxing and ski testing team at the World Championships.

“It means a lot to have him around,” said Léveillé. “Brian has so much experience and I was happy to have him on the team here to share his knowledge with us. We have such a great support staff here and they all played a big part in today.”

McKeever, a winner of 17 medals including 13 golds, pre-tested the young Quebecers final two sets of race skis, and helped him come to the conclusion on selecting the winning pair.

“That was a heck of a day. To think back to my World Juniors – top-30 was the dream and these kids are all fighting for the podium,” said McKeever.

“To watch this young kid achieve his dream is so exciting. It is nerve wracking in this role, but when the work pays off, it is a little bit of relief and celebration. We have a tight community, and it is great to feel the excitement today, especially this year when we all need a little positivity. But we are all just support. At the end of the day, it is up to the horse to deliver, and Olivier was one hell of a fast horse today.”

Léveillé is part of a new generation of Canadian cross-country skiers who officially arrived on the international ski scene one year ago when they celebrated the nation’s first-ever medal in the 4×5-kilometre team relay at the Nordic Junior World Ski Championships. Léveillé, Tom Stephen, Xavier McKeever and Remi Drolet teamed up to win the silver.

“All of these Canadian kids are competitive. You can see when you are testing (skis) with them they have the right head space needed to win,” added McKeever. “To have two Canadians in the top-10 is awesome. They know they can beat each other at home, so when they see their teammate medal, it gives them the belief they can do it too. We are battling here with the big nations and these results are very promising.”

Russia’s Veronika Stepanova was the fastest junior woman on the day with a time of 13:44.3.

Hugo Lapalus, of France, was crowned U23 middle distance men’s champ after stopping the clock at 35:27.60.